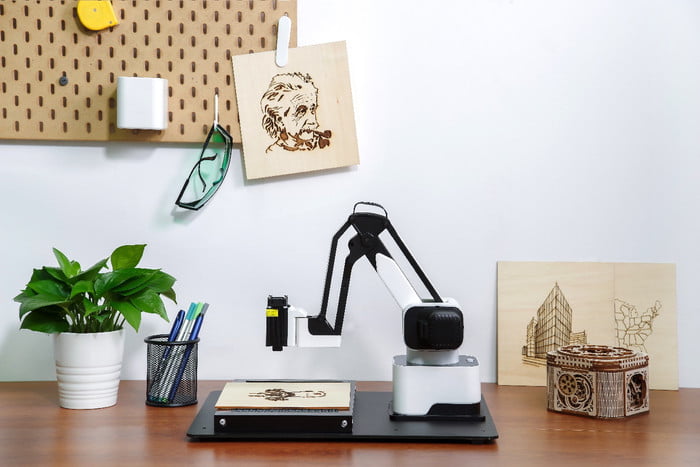 The engineers and development team at Hexbot developed a robotic arm that could be versatile and affordable while keeping an entry-level feel so that anyone might want to try it. It is capable of 3D printing, drawing, laser engraving, pick and placing and more.

Currently, on Kickstarter, the Hexbot turns any desktop into a workshop. If you love DIY projects or are simply a creator, you should pick up the Hexbot. The big selling points for the Hexbot arm are its 0.05 millimeter repeatability, and the ability to change out several heads and give the robot an array of functions.

“Thanks to the modular design, Hexbot no longer has unwanted screws on the end effector. Switch out modules in just one click. Now Hexbot comes with five different end effectors including a pen holder, laser engraver, suction cup, soft gripper and 3D printer. With the redesigned drive circuit and power method, we have significantly reduced the motor noise down to 37dB, the same noise level as a quiet night. Leave your Hexbot to do its work while you take a nap beside it comfortably. “

The robot arm was seeking just $50,000 on Kickstarter, but has already earned more than $320,000 on the crowdfunding platform: having hit its original funding target within just five minutes of going live. The interest is almost certainly thanks to its versatility.

Pledging for the basic kit will set to back $349, which includes the Hexbot robot arm, pen-holding module, power supply, and high-speed USB-C cable. Assorted add-ons — including modules for laser engraving and 3D printing, 3.5-inch touchscreen display, pneumatic kit, conveyor belt, and sliding retail — cost anywhere from an extra $50 to $869. Shipping is planned for October 2019.