NoCAN: wired IoT platform for makers, based on CAN-bus

Omzlo has won Kickstarter funding for a NoCAN platform for wired IoT home automation that connects sensor nodes to a Raspberry Pi.

An Omzlo PiMaster HAT board mediates between the Pi and multiple, Arduino-compatible CANZERO boards that can connect sensors, lights, relays, and actuators for home and garden automation. The boards are connected via an Ethernet cable running the serial CAN-bus (or CANBus) protocol, which is commonly used in industrial and automotive applications.

“NoCAN is an Arduino-compatible ‘wired’ IoT platform for makers. It is based on CAN-bus: a robust bus communication protocol that is widely used in industrial and automotive applications. It enables you to connect a set of Arduino-compatible ‘nodes’ to a Raspberry-Pi, using a single cable that brings both power and networking. The Raspberry-Pi controls the network and acts as a gateway to the outside world. You can connect sensors, lights, relays, and actuators and build complex IoT application easily. You can even control your network with your smartphone thanks to the ‘blynk’ gateway included in the software.”

Omzlo’s HAT and CANZERO boards are open source in hardware and software, and the company will provide schematics. 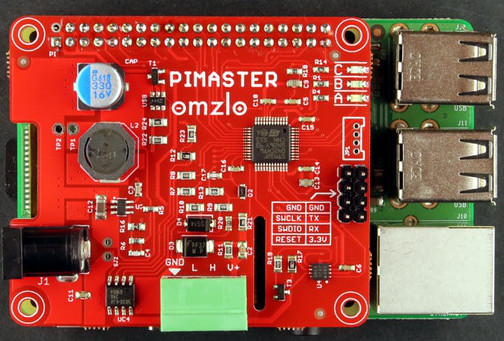