Imperial Shuttle Drone, Darth Vader is among us!

The Maker and MIT aerospace engineer Adam Woodworth did this incredible drone, replicating the imperial drone with engine special effects too. Amazing!

Over the past decade or so, I’ve been building a new RC airplane every month or so. Some are big, some are small, but all of them are unique. Building is my favorite part of the hobby. We live at a time where the electronics and components that go into these builds are small, cheap, and capable enough that projects that would have been suited for a DARPA program a few years ago, can be built in your garage over a weekend.

The Lambda class shuttle (more commonly known as the Imperial shuttle or as the infamous Shuttle Tydirium) has always been one of my favorite ships. I knew it would be another awesomely cool thing to bring to life, with those iconic folding wings and glowing blue engines.

After much searching, I found a set of plans for the Imperial shuttle, that were both simple enough to build using reasonably thick foam (3mm and 6mm Depron) and good enough resolution, that I could enlarge them to a size big enough to fit all the electronics in it. The plans were printed out, then attached to the building materials with 3M77 spray adhesive (6mm foam for the main structure and poster board for the skins). 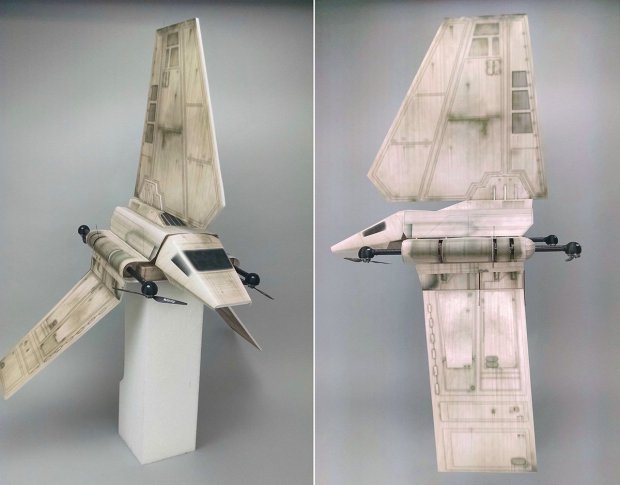 After hours of fiddling, I finally got a line driven system working with an over center pivot arm, and it worked great going up, but relied on gravity to go back down, and I couldn’t retract the wings to their full landing configuration and have it work repeatedly. I shelved the project. It sat on the bench as a full Rebel fighter fleet came to life, and the year came to an end. 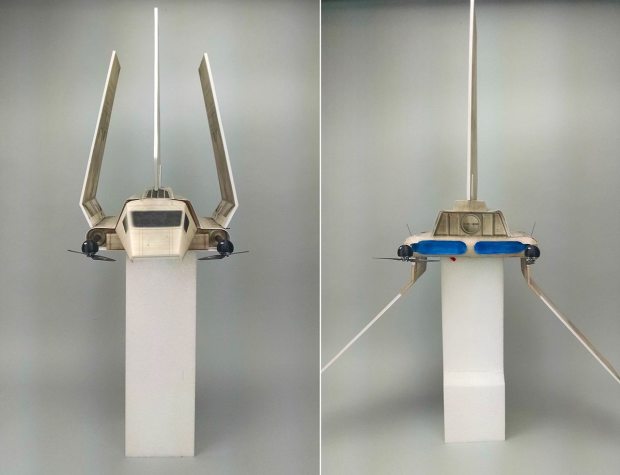 Finished up, with wings folded. The wings are pulled by the servo, and go down with the help of gravity. Since the wings go over center, I had to add a little carbon spring in the form of a short length of 0.5mm rod, to help push the wings down. I added a single blue LED to illuminate the painted engines.