Apollo Lake CPU, Upgradeable Memory and Storage: This is the New Gigabyte’s SBC 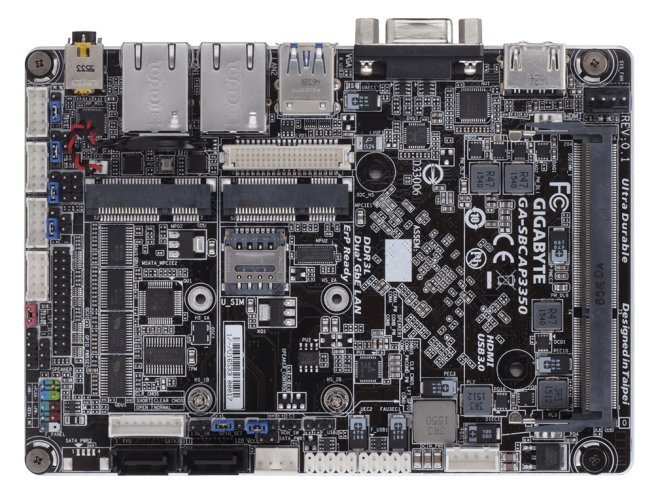 The new Gigabyte’s GA-SBCAP3350 offers more power and modularity than its main rival: the Raspberry Pi.

This sbc measures 146 x 102mm, which is nearly twice the size of the Raspberry Pi at 85 x 56mm. Gigabyte’s board looks more like a PC motherboard, and in some ways it works like one. Gigabyte built this board with a Copper PCB design and a large aluminum heat spreader on the underside: this will allegedly allow for better thermal performance and longer life.

This board doesn’t come with everything you need built in, which some might consider an advantage. You can add your own RAM to the board thanks to the single DDR3L SO-DIMM slot (it can handle up to 8GB). There’s also a mini PCIe slot for plugging in an mSATA SSD drive. Next to that is a second slot to accommodate a half-length Wi-Fi card. There are two standard SATA connectors as well.
In addition, you’ve got two USB 3.0 plugs on the back, plus four more USB 2.0 connections available via pin headers on the board. There are dual gigabit Ethernet ports. For video, you get both VGA and HDMI, and the HDMI can do 4K resolution at 30Hz.

At the heart of Gigabyte’s mini computer is an Intel Celeron N3350 CPU (Apollo Lake family), which is a dual-core chip clocked to 1.1GHz with turbo boost up to 2.4GHz. This is not exactly a blazing fast GPU by mainstream computer standards, but the Raspberry Pi 3 is much more modest with its Broadcom quad-core ARM chip. The x86 architecture on the GA-SBCAP3350 allows you to run more powerful software and operating systems. The CPU is soldered to the board, so it’s the one thing you can’t upgrade.

So, the GA-SBCAP3350 is sort of in between the Raspberry Pi and a “full” PC motherboard. Gigabyte seems poised to market this board to businesses, but anyone interested in building a tiny PC might be interested.