AmbaSat-1 Space Satellite Kit: Your Own Satellite Launched into Space 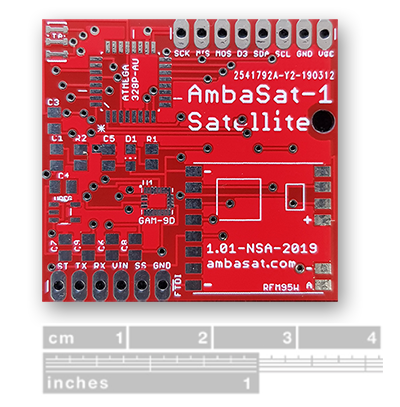 The AmbaSat-1 is a tiny Space satellite kit that you assemble and code yourself is now available from £35 on Kickstarter.

AmbaSat-1 is part of a new generation of satellites known as Sprite satellites. They are tiny spacecraft measuring 35 mm square and just a few millimetres thick. Pioneered by the original KickSat, the company aims to launch groups of AmbaSat-1 satellites onboard a commercial rocket.

So, once your satellite kit is assembled and programmed, it will be launched onboard a commercial rocket which will deploy your satellite into Low Earth Orbit, where it will spend up to 3 months in Space.

It will transmit sensor data back to Earth where the signal is received by a network of over five thousand internet-connected LoRaWAN Gateways, forwarding data to your Mission Control Dashboard.

“AmbaSats are just a little bigger than the size of a couple of postage stamps but have solar cells, a LoRaWAN radio transceiver, microcontroller (an Arduino compatible ATMEGA 328P-AU), memory, a gyroscope, accelerometer, magnetometer as well as a range of other sensor options. Making use of The Things Network (TTN), AmbaSats are capable of transmitting data to over five thousand Earth-based TTN receivers (Gateways) which are spread around the whole globe. No specialist radio receiving equipment is required, your data appears over the internet directly to your AmbaSat Dashboard.”