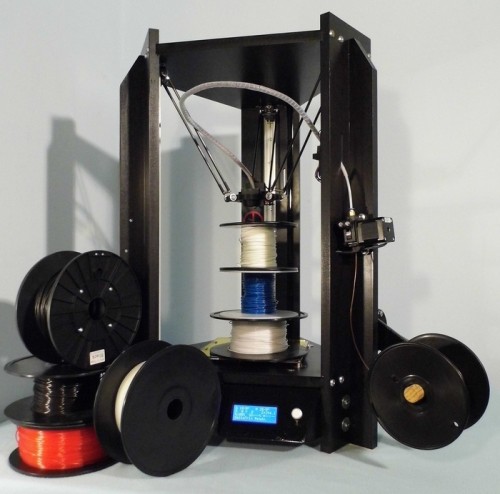 The project is based on the fully open source linear Delta printer, power by a 32-bit ARM processor (Arduino).

The resolution is high, allowing potentially 25 micron layers, and a special care has been put on choosing highly reliable components. So you won’t find homemade components in the key structural parts (those could be very cheap but you have no guarantee on performance and durability), but only commercial parts specifically designed and built to perform and last. As an example, carriages and rails are from Igus, all-metal rod ends pre-tensioned to eliminate wobble and play, heater pad realized on purpose, etc.

One advantage of this printer is that it’s fast to assemble (for instance, the self-aligning frame takes less than 5 mins for the assembly) and also, if you need to move or transport the printer anywhere else, you don’t need to calibrate it before printing. Moreover, a complete list of parts, materials and accessories is available. Among all, you can have transparent doors to close and protect completely the printing area: this isn’t a common feature for Delta printers.

More details on Instructables, where you can find the full downloadable project, and on Kickstarter where Richard started a fruitful campaign.

You can still provide your submission to our 3D Contest!