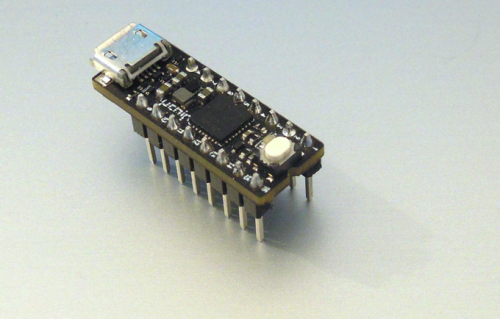 It’s uChip, an Arduino Zero compatible board, in a 16-DIP package. uChip packs the same ATSAMD21 series microcontroller of the Arduino Zero, therefore many of the existing projects can run literally unmodified on uChip.
Furthermore, uChip features also a buck and a boost converter. The first one allows powering an external circuitry, when uChip is USB powered (the output voltage can be software selected). The boost allows to power USB devices with an input voltage as low as 3.3V, when uChip works in host mode.

Besides all the projects that run on Arduino Zero, we created some uChip-specific examples such as a colorful platform game with parallax scrolling, and a VGA library, that allows to display color graphics and text in a standard VGA monitor, without any external integrated circuit (just 11 resistors are required!).

We think the opensource community will benefit from uChip as it will be not only cheaper than an Arduino Uno, but also very small. However, we need the help of everyone to make it becoming a reality.