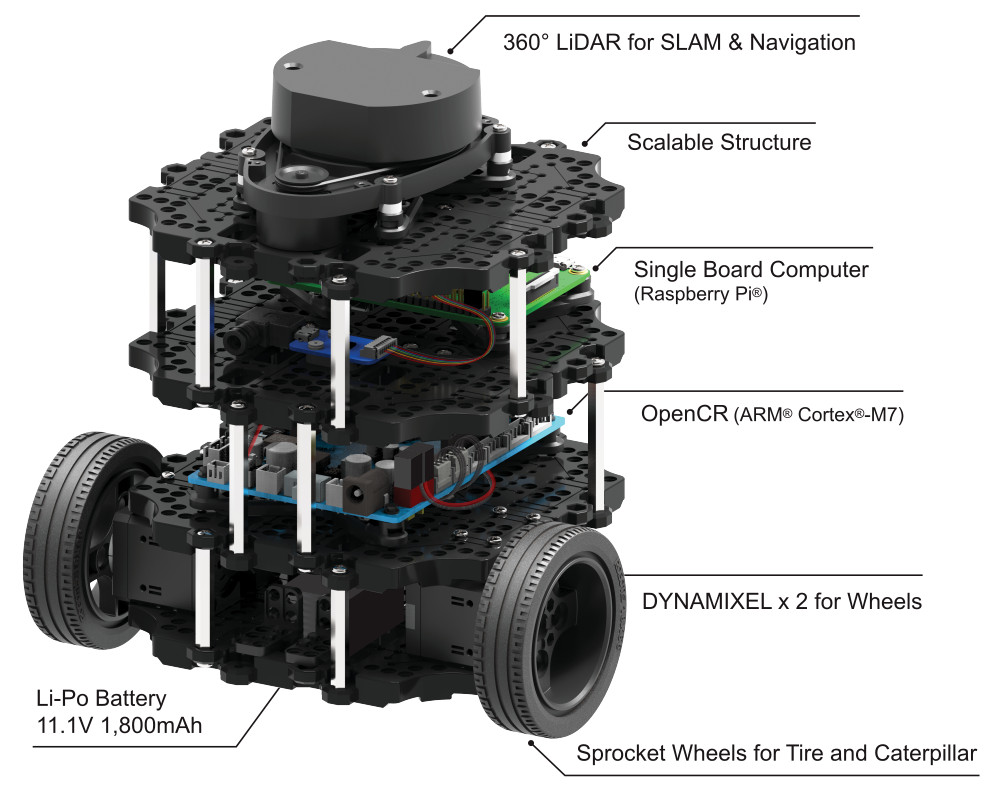 The “world’s most popular open source robot for education and research” has received a major upgrade with two modular TurtleBot3 models from Open Robotics that run Linux and Robot Operating System (ROS):
–      Burger version, based on a Raspberry pi 3 which runs on a Broadcom BCM2837 with four 1.2GHz Cortex-A53 cores and a VideoCore IV GPU. Other features include 1GB RAM, Fast Ethernet, WiFi/Bluetooth, four USB ports, and a 40-pin expansion interface.
–      Waffle version, based on the Intel Joule 570x. The higher-end of the two Joule computer-on-modules provides a quad-core Atom T5700 SoC (1.7GHz clock; 2.4GHz burst) similar to Intel’s Apollo Lake models. The Joule ships with up to 4GB RAM and 16GB eMMC, plus WiFi/Bluetooth, 4K video, CSI/DSI, GPIO, USB, and UART I/O. The module offers built-in support for Intel RealSense.

The TurtleBot3 was built by Robotis, and the project is maintained by Open Robotics, a taxable subsidiary of the Open Source Robotics Foundation (OSRF). Open Robotics also maintains the open source ROS stack that runs on the other TurtleBots as well as scores of other robots and drones. Other collaborators include Intel, which contributed the Intel Joule module and Intel RealSense cameras, and Onshape, which supplies its full-cloud 3D CAD editor for working with the TurtleBot’s open source 3D CAD files.

In addition to leveraging LiDAR and RealSense for location, the TurtleBot3 gains precise spatial data by integrating a pair of Robotis Dynamixel smart actuators in the two sprocket wheel joints. Both TurtleBot3 models run on a Robotis OpenCR board for controlling the Dynamixels and sensors, such as the board’s built-in IMU, as well as touch, IR, color, and others. The board can run Arduino IDE code on its 216MHz, 32-bit Cortex-M7 STM32F7 MCU. The high-end STM32F7 includes an FPU, and is said to offer 462 DMIPS performance.

The open spec OpenCR control board has 18 GPIO pins, 32 Arduino pins, and 3.3V, 5V, and 12V power supplies. There are three RS485 and three TTL interfaces for controlling the Dynamixels. Other peripherals include three UART, five ADC, four 5-pin OLLO, and single CAN, SPI, and I2C connections. A micro-USB port lets you connect with a PC, and various LEDs and buttons are available.

TurtleBot3 can be teleoperated by an Android app, as well as wireless devices such as a keyboard, PS3 and XBOX 360 joysticks, the Robotis RC100 controller, the LEAP Motion controller, and more. The open source navigation software runs on Ubuntu 16.04.2 with ROS Kinetic.

Watch the video below and visit the TurtleBot site to learn more about it.