The car design was a result of a contest that Local Motors run in early 2014 and was designed by the italian engineer Michele Anoe. See here for details https://localmotors.com/3dprintedcar/. The car was also based on Renault’s Twizy power train.

This breakthrough was made possible by a machine produced by Cincinnati Inc., in cooperation with the Oak Ridge National Laboratory. The Big Area Additive Manufacturing (BAAM) machine is capable of printing at speeds unheard of on traditional 3D printers. It is unbelievably able to lay down up to 40 pounds of carbon infused ABS plastic per hour, with precise accuracy.

We also had the chance to see the Strati live at NYC maker faire and it looks very nice! 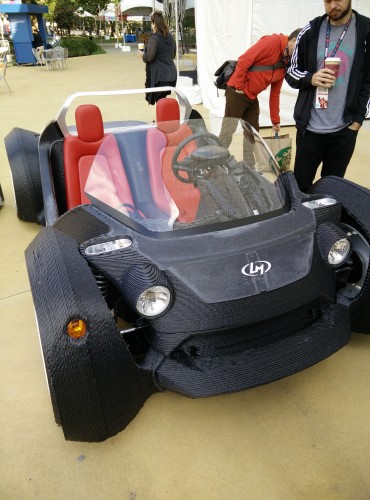