Rasky: finally, the open source Raspberry Pi 2 based KVM we want to control our PC’s! 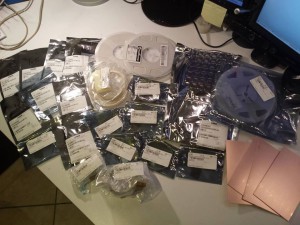 Our friend Franco Lanza is gathering funds to launch a very interesting project.

Who knows what a KWM is? Yes, usually are those quite expensive and not very flexible platforms used to virtualize a keyboard, a video and a mouse to remote a computer.

Franco is working at a low cost, open source and very functional version, based on linux and Raspberry Pi 2 computing unit. You can choose many versions, to be assembled or ready to go, starting at €150.

If you choose to fund him now, apart from purchasing the KVM system at a fraction of the final cost (from €40 on), you can even be part of it, by suggesting solutions for instance on the VGA part.

Here are the specs:

Rasky is a low cost open source (hardware and software) KVM over IP built on top of the well known RaspberryPI model 2B.

The primary goal of the project is to provide a low cost and completely open source alternative to commercially available  KVM over IP and other remote consoles like iDRAC, iLO and so on.

The expansion board for Rpi will be engineered in a way that is suitable for DIY PCB makers, and a 3d printable model of the enclosure will be available too, with an explicit goal to make it feasible to build at home a complete KVM for under 150 euro or to buy one assembled device for less than 200 euro.

For the first release it will feature:

The project is in a very early stage and some features may change.

Some other features I’m considering, i don’t know yet if for the first or the second release, is the emulation of an USB remote storage/cd drive and to add a couple of analog inputs.

All those features are implemented without the needs to install anything on the remote controlled machine/OS, so, they can be used even at a BIOS or equivalent level to remote control any machine that have at least one USB port and a VGA or, using an adapter, DVI or HDMI video output.

All the software and hardware schematics and models developed for Rasky will be available as early as i write it on the Rasky group on my gitlab, and when ready will be distributed as a deb package suitable for both raspbian and devuan.

The remote machine will be reachable on web using an ajax webvnc or using vnc directly.

For bandwith saving vnc will be configurable for different level of quality/resolution/colorset/refresh.

The enclosure will be 3d printable and both the stl model and the OpenSCAD source will be available on gitlab.

From the hardware site the goal features are:

Rasky can be connected to LAN both by ethernet and/or wifi, in latter case using a common Rpi compatible wifi usb dongle.

The KVM over IP will be implemented as an expansion board for Raspberry PI model 2, the PCB will be as simple as possibile, in any case no more than 2 layers design and using only commonly available components, so, it will be suitable for DIY makers to be built at home.

Relay and digital inputs will be controlled by using the Well known Wiring PI library and then exported on the web for remote control.

For the Keyboard and Mouse circuit and software, an ATMEGA32U4 will be used connected to the raspberry through the SPI bus, all the code needed for the MCU is already available thanks to projects like the hackaday driverless mouse and keyboard sharing and other arduino based projects, so, only a vnc to SPI bridge will be needed, and developing it on Raspberry is fairly easy.