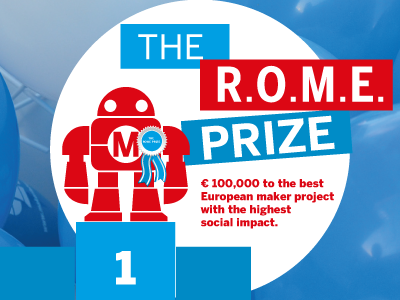 Great news from Makers Faire European Edition 2016 in Rome! The general manager of Asset Camera, the special public company that is organizing the Faire, Massimiliano Colella and the executive content coordinator Alessandro Ranellucci made this announcement. €100,000 to the best project having a strong social impact.

Last days to submit your project, the deadline is June, 15th. Cross your fingers!

One of the great new features we have thought up for Maker Faire Rome 2016 is the R.O.M.E. Prize: the € 100,000 prize we will be awarding to the best participating maker. While a little crazy and apparently over the top, it is probably also the most natural development of no less crazy a path we set out on four years ago, with the ambition of creating Europe’s largest innovation event and, thanks to everyone’s help, succeeding in the endeavour.

Over these months, we have worked to put together rules to be applied to the Call for Makers, seeking all the guarantees needed for the prize to go to whoever truly deserves recognition and encouragement. We thus decided to exclude large businesses (more than 50 employees, or sales revenues exceeding € 10 million) and all public administrations. Even if all are makers, we want the prize to help those who have achieved important results even without starting with major resources. Behind every project is a story, and that story makes all the difference.

Towards this end, we also planned an exclusion for projects that received public funding. But perhaps we were over-zealous, and many makers reported to us having received aid in small amounts, useful but not essential to the project’s success. It is not always easy to draw the line. Should we have decided upon an arbitrary threshold? We might have created more problems, and more bureaucracy. And after all, if a project has won financing, this means it is a good one, and by no means would we wish to penalize it for that reason. In the end, we decided to remove this constraint: even those that have received public financing can participate. But they will have to convince the panel of their project and their story, just as all the other entrants have to do. We’re giving it our all. Now we look forward to your projects. May the best entrant win – because with it, all of us are winners.