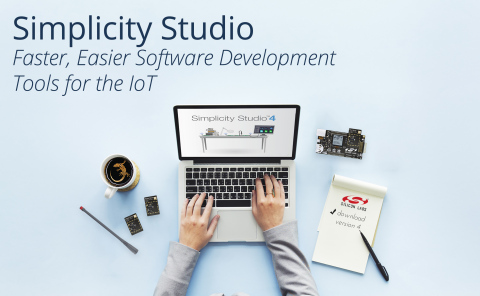 Silicon Labs has made significant updates to the software’s infrastructure and user interface in this latest iteration with the aim of improving ease-of-use and speed of download and install. Simplicity Studio can now automatically detect a connected 8-bit or 32-bit MCU or wireless SoC, graphically configure the device, and show supported configuration options. It also offers custom-tailored installation options, allowing developers to download specific tools for the Silicon Labs product they are using, removing the overhead of the full Simplicity Studio suite installation.

Simplicity Studio uses an IDE based on Eclipse 4.5 and includes a suite of tools for energy profiling, configuration, capacitive touch sensing, and wireless network analysis, as well as demos, software examples, complete documentation, technical support, and community forums. In addition to individual devices, as part of version 4 developers can now select a pre-defined solution, such as a wearable device, and Simplicity Studio will automatically set its context to the key components comprising the solution, such as an EFM32 MCU, a Bluetooth module, and an optical sensor. This eliminates inefficiencies of context switching and jumping from tool to tool.

Simplicity Studio Version 4 can be downloaded for free at www.silabs.com/simplicity-studio.