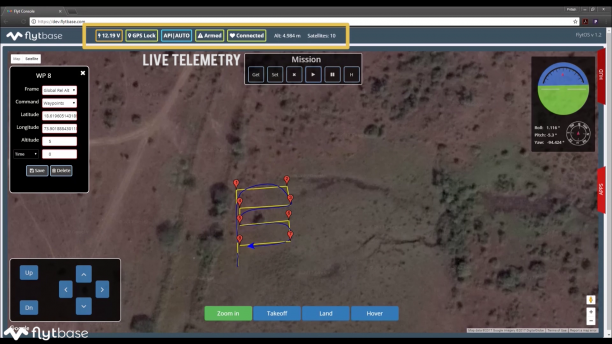 While drones are commonly included in discussions about the Internet of Things (IoT), FlytBase says that developing communication protocols for drones is different than other elements of IoT.

“Drones, are deployed in smaller fleets, have large lithium-based batteries, and send a large amount of data over a short period of time. Drone applications need real-time navigation, telemetry and payload access over a high-bandwidth secure link.”

In an effort to meet the needs of drones, FlytBase has designed a custom protocol. Their new platform, FlytBase Cloud, uses the protocol to efficiently connect drones to cloud-based business applications in real time. FlytBase Cloud is also open for development, so developers can easily build applications

“Over the years, we have seen rapid development of technologies that allow our gadgets/devices to be connected to the internet. Several IaaS/PaaS platforms, such as AWS, Azure, Google Cloud offer ready tools for IoT (Internet of Things),” FlytBase CEO Nitin Gupta tells .

“However, no such tools exist for integrating drones with internet and cloud-based business applications. FlytBase Cloud is the first platform to bring this capability to developers.”

“IoD (Internet of Drones) will enable efficient development of applications that need live connectivity with a large fleet of drones, spread over large geographies (or even continents),” says Gupta. “It will also enable faster integration of drones with a variety of business processes and workflows, to truly leverage drone technology for business applications.”

The FlytBase flagship product, FlytOS, is the world’s first drone operating system that works across the widest range of hardware options, including, those from Intel, Nvidia, Qualcomm, Raspberry Pi and Samsung. FlytBase also offers, FlytSim, a simulator for drone applications, and Drone Software Development Kits for web and mobile platforms.