An interesting printer that prints circuits on various materials. Despite it’s high price points and the rumors that the ink will we costly as well, that’s an amazing piece of work.

Printing a circuit isn’t exactly a new idea. In fact, researchers have been putting down silver nano particles using a process similar to ink-jet printing for years. Heck, you can even hack your existing desktop unit to do the same thing with about $300 in components. Still, a retail-ready circuit printing machine has so far managed to elude us. That’s where the EX¹ hopes to make its mark. With most of the early bird specials already gone, you’ll have to pledge at least $1,499 to its Kickstarter campaign to get one, which puts it firmly in prosumer territory. (And that’s just for the version that requires some assembly.) But there’s no denying the allure. The EX¹ uses two different “ink” cartridges to lay down layers of material that will form lines of silver nano particles. And, thanks to its flatbed design, you can print your customized circuits on anything from standard PCBs, to cloth, wood or even paper.

via EX1 prints circuits on paper, cloth, almost anything you can imagine. 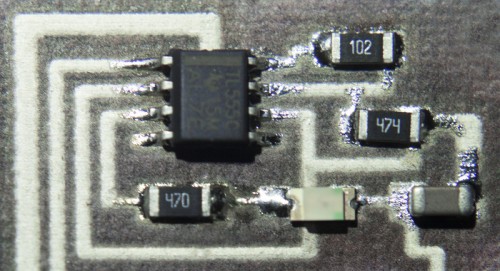