DIY a Self-Balancing Robot Driven By an Insect 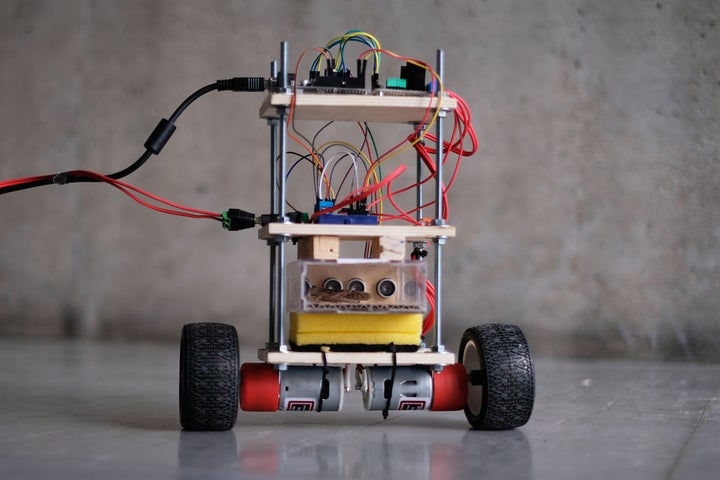 Augmented Arthropod by Grzegorz Lochnicki and Nicolas Kubail Kalousdian is an innovative self-balancing robot that is actually piloted by the movements of an insect placed inside a plastic case using two HC-SR04 ultrasonic sensors.

The structure for the build consists of three platforms separated on threaded rod and a couple of rather standard DC gear motors. Electronics include an Arduino Uno, a BNO055 IMU, and an L298N motor driver.

The problem of a self-balancing robot is that of an inverted pendulum. In order to counter-act the force of the robot falling either forwards or backwards we need a mechanism which will keep its center of gravity directly above the point in which it pivots. This pivot point would be our wheel axle. Our strategy of counter-action will be conducted by driving the robot’s wheels in the direction in which it is falling.

…So our strategy will involve implementing a PID controller to drive the wheels back and forth in a controlled, mathematical manner, one that responds to the direction in which the robot is falling, the speed with which it falls, the amount it has tilted so far, and the relationship between all of these three variables over time.

PID stands for Proportional, Integral, and Derivative. Each of these terms affect the controllers response in different ways. Together they produce an output which drives the motors to keep the robot balanced.

Watch the video below to find out more information.