Don't miss
Home   >   Interviews   >   Woelab: bringing Africa on the train to the next Industrial Revolution

Woelab: bringing Africa on the train to the next Industrial Revolution 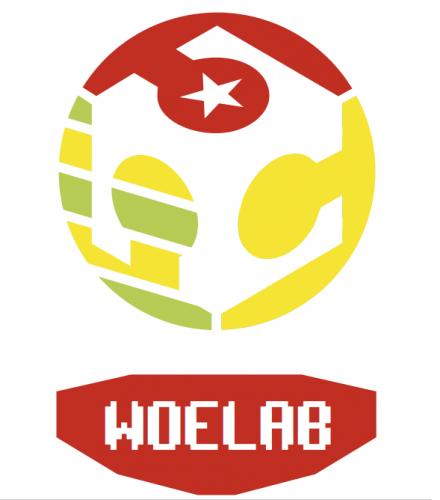 I just wanted so badly to do this interview: when meeting the guys on the stage of Fab10, where they were prized as winners for their amazing approach at building 3d Printers – out of electronic waste, I just felt that these group of hackers was really doing something more important, something that deserved to be disseminated, a story to tell. Enjoy this awesome interview with the founder of WoeLab, Sename Koffi Agbodjinou, architect and anthropologist and creator of the research platform “L’Africaine d’architecture” and of this amazing team which is using fabbing and making as tools to build a new cultural ecology.

[Simone Cicero]: First of all, would you guys give us a bit of background regarding the story behind your project and endeavours?

[SKA] At the beginning of all this; there is a correspondence identified between the “Hacker ethic” and African traditional societies values.  I explored possibilities of an alternative to the architecture as currently practiced in Africa with bringing up to date the traditional forms and promote and local know-how, dynamics and resources. This posture seemed doomed to remain at the gates of the city. Discovering the Maker movement in 2012, he found there the potential to help expand this “neo-vernacular” ethic to the urban context. He theorized this approach in #LowHighTech concept which aims to highlight this paradoxical closeness with our traditions and make possible a new approach of technology; aimed at putting in the reach of all; including the poorest strata of society.

#Lowhightech finds its application at the urban scale in “African HubCities”, a sort of african “smart city” project.  “HubCity” explores the relevance of thinking the development of African cities around open events and innovation places developed in a strictly African perspective. With Barcelona Fabcity it is one of the two urban  projects built around fablabs. It is an urban utopia that, in totaly independance, he began to test in the Djidjolé district in Lome … and that gave birth to  WoeLab first “African Technology Democracy Space“.

Today, it is an unusual place, the only one in Africa, open freely to everybody according to the Democracy Technology ethic! WoeLab is in fact a real neighborhood fablab, proximity incubator-accelerator  for boosting both open native hardware technology projects and international approaches of digital solidarity. A single framework for emulation, where young Africans through collective intelligence and free mentoring, access to inventors, project managers and recently also Corporate Head. But the most famous WoeLab’s project and the one that best embodies #LowHighTech philosophy is the W.Afate 3D printer in recycled materials and which was the first african contribution to the 3D print technology revolution.

[SC]: Can you give us a more complete information on what are woelab activities?

[SKA] If #LowHighTech appears the medicine, the #RepLab program of prototyping and eco-designed tech-hubs installation (micro-labs, small nearby factories, digital libraries, urban serious game, etc.) is the instrument for inoculate it to the neighborhood.

The goal is to provide a given territory as many points tech-incubators promoting low footprint uses  that restore some cohesion and ability to provide the professionalism and the potential of prototyping down to a sub-scale. That could help increase the general level of populations and  consider development issues approach that is not elitist but vernacular.

WoeLab is modeling this type of place and made the first #RepLab implemented. It is now a 20 members strong community of makers. A shared space in which innovation is developed daily, allowing the exploration of new approaches to productive collaboration. The space houses latent technological potential just waiting to be  developed under the dual conditions of freedom and transparency. Taking the Fablab to street level, WoeLab exists to be a Center of Digital Resources, a Technology Incubator with nursery structures for web domains, digital  technologies and ICT.

Its mission is not only create, encourage, support and popularize virtuous and disruptive technologies like W.Afate, but also stimulate innovative startups. Indeed, since recent months, we also prototype an innovative business. This young startups’ incubation program have an immediate success because 3 of the 5 companies we have created have been retained by the Government in the top 10  entrepreneurial projects “of the year in Togo. ‘TERRES, a Startup specialized in Agro-Urban that  I personnaly direct, has received the first prize.

The entire project is managed by it’s own members and all works are seen as a collaboration by the entire community. Thus, every startup idea, every fledgling project is developed to it’s full potential, drawing on their collective knowledge, skills and abilities. 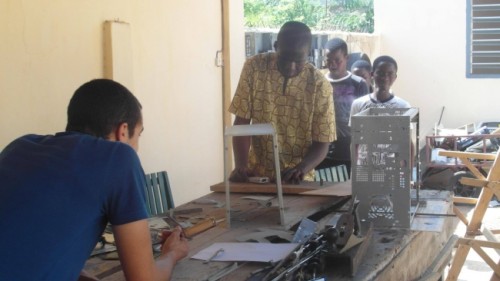 [SC]: I’m curious to understand more of your experience in spreading awareness for innovations in the maker and digital fabrication scene in Africa. How are these opportunities seen by the people?

[SKA] There certainly has an interest but not really a digital fabrication scene in Africa and we can not nor talk about maker movement in Africa. All this is very new …

There is a potential of African ingenuity is that we require deprivation. There was also, it is true, who brought some glitter to this perception, some pretty recent stories of kids who have gone to glory garbage … William Kamkwamba, Kelvin Doe, etc. But what keeps overall resourcefulness and resilience can not be equated to a movement or even to culture. Regarding the proliferation of makerspace it is too anecdotal.

There is no spirit or relays. For there to be a movement, should be a dynamic that transforms reality, a potential patterns in a real culture with trends, events, places dedicated etc. in all cases, community spirit is in our opinion essential quality that all this will be built.

[SKA] Yes for sublimate a culture of resourcefulness that already exists … And because digital fabrication democratizes manufacturing capacity; so this is a device par excellence and African economic urban society is largely informal. 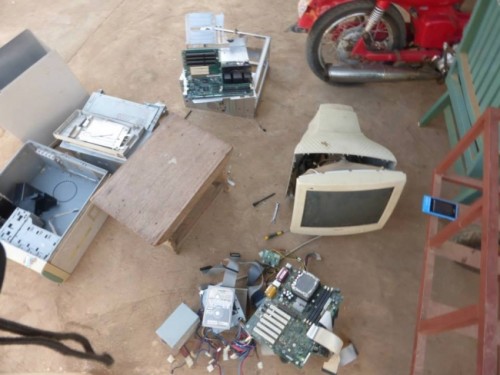 [SC]:  You guys work a lot with e-waste and – as It’s possible to see in your website – you not only create a – now famous – 3d printer but also make other uses of these pieces of materials.
The first time I saw your 3Dprinter operating out of computer e-waste I was pretty astonished because one doesn’t realize how much richness is still available in these objects. Can you tell us more of your approach to reuse of electronic waste and what’s the significance of this?

[SKA] Everything we do is guided by the LowHighTech specifications . One of the features is to develop technological projects very advanced but with modest and resources close to us.

As electronic waste is unfortunately practically a “local” material now in Africa, with the proliferation of computer garbage, we are naturally led to much use. It is also a way of resilience and ecology.

What is more exciting for us is the fact of from little things or anything that seems to no longer serve much or even that could encumber, bringing change and help development occur. It is a culture that African cities have naturally in the resourcefulness system; but we could systematize it as a future policy. It’s a bit the way opened up by the experimentation LowHighTech … Hopefully policy makers will see. 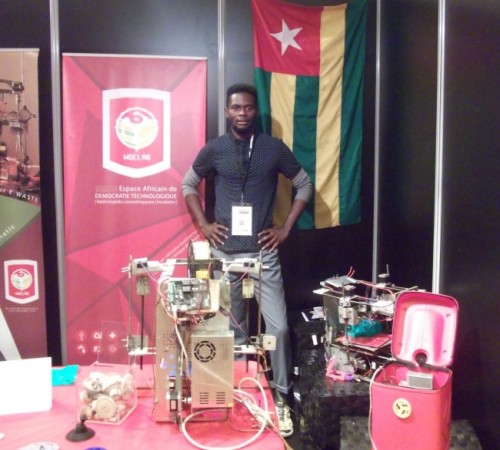 [SC]: How do you plan to move forward on top of your recently gained Fab award? What are your future plans especially related to W.Afate project.

[SKA] Just born, the W.Afate ideally embodies the innovation potential of the continent. We work on putting it in every hand with:

The deployment of these program is a comprehensive strategy which aims to popularize and mainstream 3D printing with African populations, with the goal of making the Lomé city in the world with the highest penetration rate in terms of knowledge of the technology. This technology must be known and understood by the greatest number.

The obvious challenge is, in the wake of the W.Afate exception, to allow to Africa not to miss the train to the “next industrial revolution.”

It is also to create a Local market to W.Afate. ‘W.CORP, the StartUp prototyped in stride to serve this ambition by WoeLab community, was targeted by the Togolese government in the 9 best business plans at the last Forum of Young Entrepreneurs.

With this several original social programs already driven (# 3DprinTogo Conferences; 3Dprint- Cyber- Cafes ; 3DprintEducative;. Etc) we would like to put W.Afate now at the heart of what, with #LowHighTech, seems a real vision of development for Africa.

For WoeLab overall, the challenge is to make sustainable the project still now dependent on L’Africaine d’architecture for funding. In this sense our servicing business incubation program is very important.