Two students from MIT neuroscience labs are building an open-platform for electrophysiology as a hub of a nascent open-source hardware community for neural technology.

Exemplars of the system already gone through beta testing and now 100 improved units, are now arriving in neuroscience labs around the world. They estimate that each system will cost about $3,000 to produce, way less than the typical cost of $60.000

The goal of Open Ephys (which is short for open-source electrophysiology) is to encourage researchers to put resources into developing open-source tools for the benefit of the whole community.

“In addition to changing the tools, we also want to change the culture” they say.

Look at this intersting coverage here on IEEE spectrum: http://spectrum.ieee.org/biomedical/devices/neuroscientists-join-the-opensource-hardware-movement

WHAT IS OPEN EPHYS ALL ABOUT?

We were trained in labs that value a do-it-yourself approach to science, while simultaneously placing tremendous weight on technical proficiency. We are not motivated to create new tools for their own sake, but by the need to move our research forward at a tolerable pace. On a daily basis, we find ourselves solving hardware and software problems that have been confronted countless times in the past. However, the solutions are often unpublished, inaccessible, or hard to apply in our unique situations. We hope to find a middle ground between turnkey commercial products and custom tools that are used a few times before they become obsolete.

Our main focus is combining multi-site tetrode recording with optogenetic stimulation. We’re really excited about observing and perturbing neural networks on the timescale at which they operate, but we wish the tools for doing so were more flexible, easier to use, and more affordable. Our ultimate goal is to create a completely open-source platform for recording neural signals and analyzing them in real time. In the long run, this has the potential to turn into a viable competitor to the closed-source systems that currently dominate the market. But in the short term, our tools will be of greatest interest to neuroscientists like ourselves who yearn for a more versatile toolkit and aren’t afraid to get their hands dirty to acquire it. 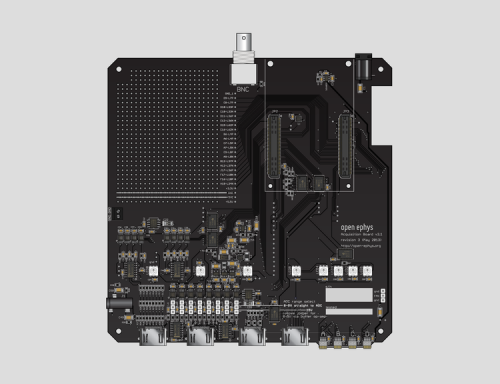