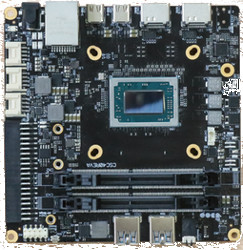 “The UDOO BOLT is the world’s first maker board with a shockingly powerful GPU – nothing short than AMD Radeon™ Vega 8 and AMD Radeon™ Vega 3 Graphics, the most incredible GPUs you’ve ever seen on a maker platform.

With such a wonder you can play popular video games like League of Legends, Overwatch, CS:GO and DOTA 2 at Full HD resolution.

Furthermore, the UDOO BOLT features HDR. And as if it weren’t enough, it supports Free Sync 2.”

That is the description that you can find about Udoo Bolt in the related Kickstarter page. Seco’s Udoo project quickly passed its $100K Kickstarter funding goal for the world’s first maker board based on AMD’s new, x86 architecture Ryzen Embedded V1000 SoC.

The 120 x 120mm Udoo Bolt runs any 64-bit desktop Linux, Android, or Windows distribution, and offers Arduino compatibility, complete with a shield connector and an Arduino Leonardo-compatible Atmega32U4 MCU. The Ryzen Embedded V1000 CPU and the Atmega32U4 can be configured to communicate via USB so the MCU can run while the CPU is turned off, and then wake it up when needed. The full Arduino compatibility also makes it easier to work with the board’s 3x Grove connectors without the welder to connect to Seeed’s Grove sensor and I/O add-ons.

Thanks to the Vega graphics, the Udoo Bolt also supports HDR video for richer colors and other visual attributes.