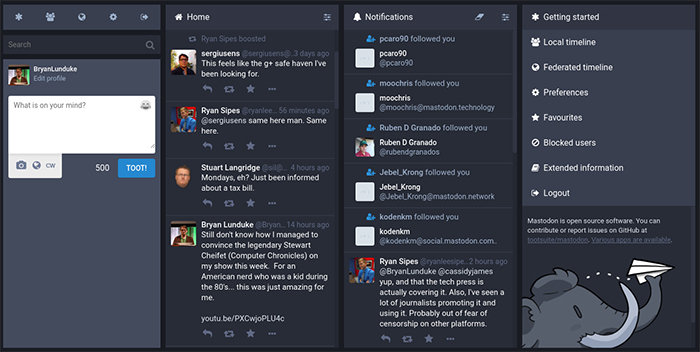 “Mastodon is a free, open-source social network. A decentralized alternative to commercial platforms, it avoids the risks of a single company monopolizing your communication. Pick a server that you trust—whichever you choose, you can interact with everyone else. Anyone can run their own Mastodon instance and participate in the social network seamlessly.”

Mastodon is a piece of software that has been written by Eugen Rochko to enable users to use the social network as an alternative to commercial platforms.

He wrote the software to be compatible with an existing network of servers, often called the “fediverse” which runs software called “GNU Social.” GNU Social and its protocols govern interoperability between software such as StatusNet, Frendica, PostActiv, and Hubzilla.
Users can log on to any Mastodon instance and communicate with anyone across the Mastodon fediverse in “Toots” of up to 500 characters.

Mastodon features below:
• Fully interoperable with GNU social and any OStatus platform: Whatever implements Atom feeds, ActivityStreams, Salmon, PubSubHubbub and Webfinger is part of the network
• Real-time timeline updates: See the updates of people you’re following appear in real-time in the UI via WebSockets
• Federated thread resolving: If someone you follow replies to a user unknown to the server, the server fetches the full thread so you can view it without leaving the UI
• Media attachments like images and WebM: Upload and view images and WebM videos attached to the updates
• OAuth2 and a straightforward REST API: Mastodon acts as an OAuth2 provider so 3rd party apps can use the API, which is RESTful and simple
• Background processing for long-running tasks: Mastodon tries to be as fast and responsive as possible, so all long-running tasks that can be delegated to background processing, are
• Deployable via Docker: You don’t need to mess with dependencies and configuration if you want to try Mastodon, if you have Docker and Docker Compose the deployment is extremely easy

Mastodon has exploded onto the social scene in the last week and is gaining users at a phenomenal rate…did you already try it?