Imagine having this iconic device on your desk: You can use it to simply display a scrolling marquee of any text message on its unique LED screen or encrypt/decrypt any information you wish using (still today) a very secure key. This is an ideal device to teach or learn about encryption, history & math. Because of its open software & the community of developers, the possibilities are endless & your reward is bound to increase in value over time as new applications (like e-mail encryption, secure router, etc) are written.

The original (pre-war) Enigma code was initially broken in Poland and subsequently by a team of Bletchley Park cryptologists under the leadership of U.K.’s own Alan Turing who is one of the fathers of computer science. http://en.wikipedia.org/wiki/Alan_Turing Bletchley Park’s ability to break the Enigma code is believed to have shortened World War II by about 2 years. Enigma machines are an extremely rare and important part of computing history.  A real Enigma machine sold for $200,000 in 2011.

via The Open Enigma Project by S&T Geotronics — Kickstarter. 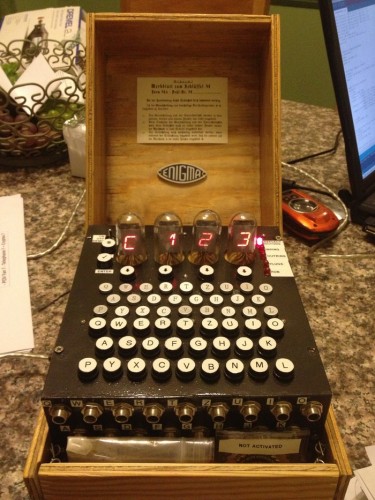