OpenIncubate is a new accelerator program formed to fund teams using open source IP to transform the IT infrastructure layer, backed by Austin Ventures, Battery Ventures, and The Valley Fund.

The three venture firms have joined forces to create OpenIncubate in response to two key technology shifts they believe will define the next decade of computing:

1) The emergence of open networking and the software-defined data center, and

2) The growing prominence of open source initiatives such as Open Compute.

The OpenIncubate program offers seed funding, work space, and mentorship to admitted teams, with no pre-defined limit on the number of teams or dollars invested.

Qualifying companies or teams of entrepreneurs must be product-oriented (versus services), and must utilize open source frameworks aimed at building on and refining the concept of the software-defined data centers in areas of innovation including hardware, software, and networking. 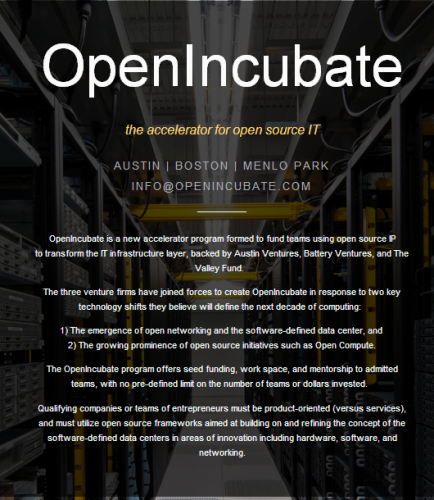