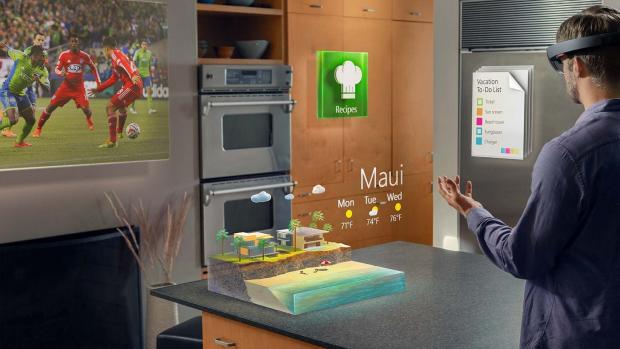 While the Oculus Rift has garnered a lot of attention in the press, Microsoft’s HoloLens appears to be shaping up to be a very interesting take on virtual reality headsets.

The HoloLens was the surprise announcement at the Windows 10 launch earlier in the year with member of the press taken to the firm’s Building 92 for a demonstration of the headset and some hands-on time with it.

Here are the main updates:

Microsoft CEO Satya Nadella made it clear that consumer applications for the HoloLens technology are currently low on the company’s list of priorities.

“This is a five-year journey”, he said, highlighting the fact that the first version of the device will be “more around developers and enterprises”, though he went on to say that “it’s in the Windows 10 timeframe, which means that it is within the next year”.

However, while Nadella specifically mentioned exploring “commercial use-cases”, he made no allusions towards consumer applications like the Minecraft demo from earlier in the year.

This implies that unlike Project Morpheus and the Oculus Rift – which are aiming for releases in the first half of 2016 – the retail model of HoloLens will most likely be in development for another few years yet.

A firm release date has not yet been confirmed but according to this report by BGR, Microsoft has said it will go on sale sometime around the release of Windows 10. With that date confirmed as 29 July, this makes it a tight timeframe for something that is still little more than a prototype.

When the HoloLens goes on sale, it won’t be cheap. According to this New York Times article, the HoloLens will cost “significantly more than a game console, which runs more than $400”. When the question of cost was brought up on Quora, the price ranged from around $500 to $1,500.

There will be three processors, the CPU, GPU and HPU. The most notable of these is the Holographic Processing Unit, which will handle all the data coming in from sensors on the device, which in turn will make sense of the world around it. It is likely to boast a full HD camera mounted on the headset to track movement of the user within their environment.

“The advanced sensors in HoloLens capture information about what you’re doing and the environment you’re in,” Todd Holmdahl explained on the Lumia Conversations blog. “This is done through the inertial measurement unit (IMU) which includes an accelerometer, gyroscope, and magnetometer. It’s this IMU, coupled with head tracking cameras, which enables HoloLens to understand where your head is and how it’s moving.”

The operating system on HoloLens itself will be Windows 10 as Microsoft has committed itself to having apps that run across all platforms. In theory the same app could run across your desktop, laptop, phone, tablet, Xbox and HoloLens. The reality is much more likely to be specialist apps running on the HoloLens.

Developers will have access to Windows 10 APIs to incorporate gesture controls and eye tracking into apps running on HoloLens. Developers won’t have direct access to sensors. The reason Microsoft gave for this was that this would lead to an inconsistent experience for users.