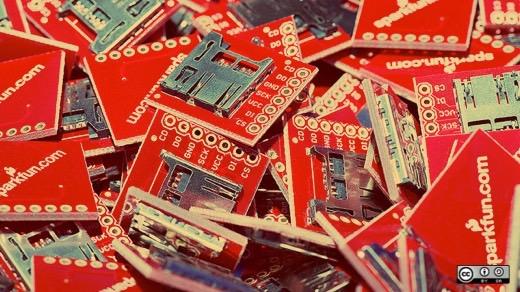 Toni Klopfenstein is a Sparkfun employee with a passion for open source hardware. In 2014 she joined the Open Source Hardware Association (OSHWA) that we met in Rome during the Innovation Week held inside the European Maker faire. Toni is a passionate girl like many our follower, if you never considered to join OSHWA and the open source movement listen to her words:

Back in October of 2014, I was lucky enough to be elected to the Open Source Hardware Association (OSHWA) board. Because the association received its nonprofit status, the board is finally able to begin increasing its reach in the community. Many new initiatives are being discussed, and we’ve been collecting a lot of community input on what is needed in the open source hardware world. One of the main objectives the board has in mind for the next year is to continue building up the community interaction and awareness of the association.

Recently, there’s been a lot of activity on our mailing list, which is very exciting. The community is stepping up and getting involved, discussing various topics such as hardware projects and whether they actually qualify as open source hardware, as well as planning a meetup to work on improving the development of open source CAD programs. There is also great movement from the community on working toward an open hardware repository to be a resource for all open source hardware users, hackers, and creators.

If you would like to contribute to these efforts or would simply like to learn more about what is going on in the open hardware community, please join the mailing list. Alternatively, if you’d like to have a direct say in the activities of the association, please consider becoming a member. Keep in mind that many companies offer donation matching, so you can potentially stick it to the closed source man by donating and having your company match it!

Next 2015 Open Hardware Summit will be held September 19th in Philadelphia, get ready!

You can read more exciting activities done at OSHWA here: Get involved with the Open Source Hardware Association | Opensource.com