Despite it’s not clear whether this will be open source or not (at least the team mentioned being open source in the email they sent us) this project it’s kinda cool:

After over two years of development, a team of lucid dreamers have working prototypes of slim sleep bands with embedded wireless electroencephalograms (EEG) that sync to mobile devices running software that detects when a dreamer has become self aware. The breakthrough builds on the research conducted at the Neurological Clinic Sleep Laboratory based at the Frankfurt University in Germany. In the paper published in 2009, researchers shared that lucid dreamers generate activity in the gamma band, peaking around 40Hz. DreamNET supports Lucid Scribe software written by Michael Paul Coder of lucidcode, which is able to isolate brainwave frequency bands and detect eye movements to trigger a gentle alarm that allows a dreamer to transition from unaware to aware within a dream and finally to awake permitting dream recall. There has never been a custom EEG with software specifically designed with this capability until now.

So if you are interested in remembering your dreams… why not to send a small donation on kickstarter? 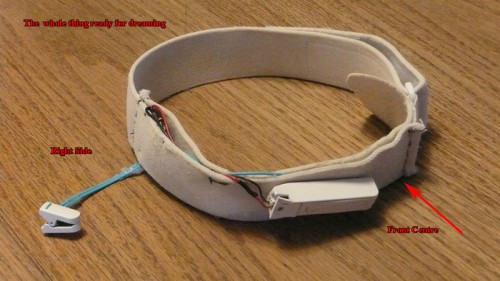