Democratizing Robotics: InMoov lends the future of AI a hand

“Being able to use contributions from other people, sharing ideas and prototypes, makes it go so much faster.”

Referencing another robotics company whose product was eight years in development, Langevin, creator of the robot, explained that InMoov was able to create theirs in only three, thanks to open source. “And if 3D printing hadn’t been held up by licenses and patents for 20 years, we would have been able to do this 20 years ago. We could have had these prosthetics 20 years ago. We would have gained so much time.”

InMoov has been recreated more than 250 times in 62 countries. The use cases that Langevin cites are laudable – in New Zealand it’s used to research human interactions with robots, and a London hospital employs their robots to facilitate outside contact, via Oculus Rift, for patients in isolation wards. Ultimately, Langevin’s vision is to build a campus in Paris where students can have a hands-on education in robotics and participate in building more robots that can act in a supportive capacity, such as for the elderly and infirm. The whole prototype can be printed at home with a 12x12x12cm 3d-printer!

I asked Langevin if he wasn’t afraid what less well-meaning people could do with the open source technology. Au contraire, he said – the reason he made it open source in the first place is because he wants to counteract the potential for maliciously-motivated development of artificial intelligence. “We don’t know what governments [or anyone else with resources to develop this technology] might be doing with AI – but we know what we are doing. That’s why we need to have our own AI.” By democratizing robotics and creating a community built upon InMoov’s ethos, Langevin believes that AI will advance the creation of transhumanism that supports and nurtures humanity rather than creating anything that could harm it. 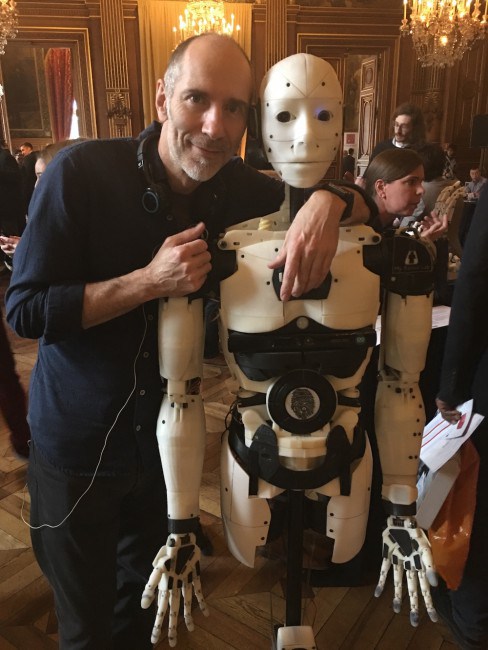