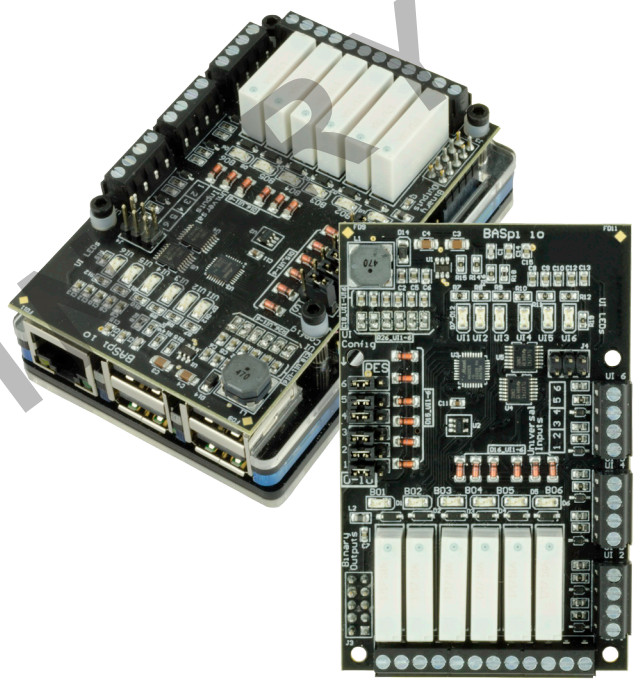 Contemporary Controls’ new BASpi Raspberry Pi 3 add-on board is the first product that is specifically designed for the BACnet standard.

BACNet is a data communication protocol for Building Automation and Control Networks that has been developed, supported and maintained by ASHRAE Standing Standard Project Committee since 1987, and used as building automation standard in the US, Europe, and more than 30 other countries.

BASpi is a BAS expansion board, referring to the Building Automation Software (BAS) that the company provides for its various BACnet compatible switches and controllers.

BASpi applications are said to include evaluation, testing, and training for BACnet and Sedona, as well as for augmenting commercial BACnet installations. It can even be used to extend BACnet to home automation applications.

The BASpi board complies with the Raspberry Pi HAT add-on standard.
It provides 6x relay outputs, as well as 6x configurable Universal inputs (analog, binary, resistance, thermistor, and pulse input) and 24 Virtual Points that are used to read or write data to or from a wiresheet provided by a BACnet client/supervisor station. The BASpi platform also enables 48 Web Components that allow live monitoring and control of wiresheet points from the BASpi’s web page.

The 12 physical I/O points and 24 Virtual Points are served up over the board’s BACnet/IP server using the Raspberry Pi’s Ethernet or WiFi connections, which are also used for web page configuration.