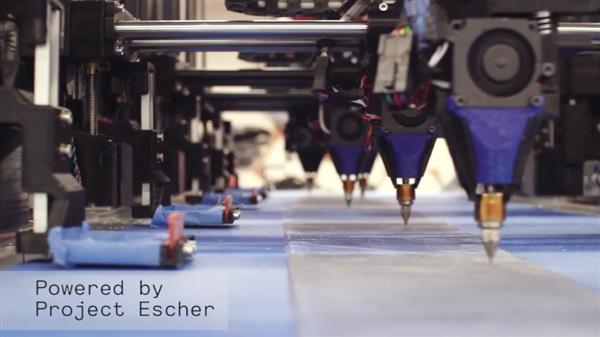 Through their Project Escher, Autodesk is now working to turn 3D printing software upside down with a smart 3D printing production line that creates very large objects by running multiple toolpaths between multiple collaborating machines very efficiently. Could this be the future of large scale 3D printing?

Autodesk is no stranger to 3D printing hardware themselves. Their excellent open source Ember 3D printer already showed their dedication to pushing the 3D printing revolution further. But Project Escher is operating on a completely different level. As its name suggests, you don’t even know where to look with the project’s 3D printer, which is essentially several machines working in unison. But the funny thing is, the hardware is inconsequential. As the project’s hardware lead Cory Bloome revealed, “Just to be clear, Autodesk is not releasing a new 3D printer. Project Escher is software and control technology that can work with a new generation of 3D printing hardware,” he said.