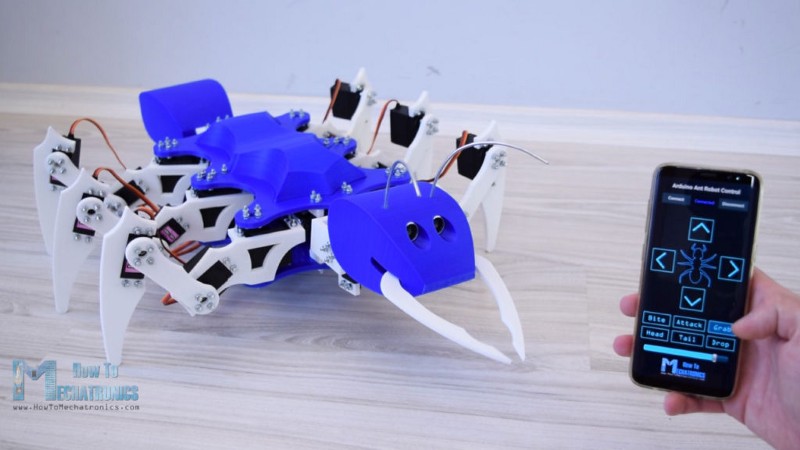 Walking robots come in many forms, and each presents their own unique challenges. Bipedal style locomotion is considered particularly difficult to do well, however designs with more legs offer certain advantages. Hexapods offer the possibility of keeping several legs on the ground while others move, providing a useful degree of stability.

This type of robot can be constructed with as little as three servos, but the maker decided to employ a total of 22 servos to move his ant-inspired hexapod around. Three metal geared servos are used per leg, as well as a pair for the head, and one each for the mandibles and tail.

An Arduino Mega is the brains of the operation — it’s the only board in the Arduino family that can handle the number of servos needed — and a custom PCB was printed to accommodate wire attachment. An HC-05 Bluetooth module is used for communication with an Android app, which controls the ant. Furthermore ultrasonic sensors in the head allow the ant to automatically defend itself against predators that get too close its ultrasonic sensor eyes.

As the name suggests, the hexapod has six legs but in addition to that, it also has a tail or abdomen, a head, antennas, mandibles and even functional eyes. All of this, makes the hexapod look like an ant, so therefore we can also call it an Arduino Ant Robot.

For controlling the robot I made a custom-built Android application. The app has four buttons through which we can command the robot to move forward or backwards, as well as turn left or right. Along with these main functions, the robot can also move its head and tail, as well as it can bite, grab and drop things and even attack.