An update from Axiom Open Cinema: the Open Module Concept for Apertus°

A news coming from the Submit section: The team at Apertus just published an update to the rather popular Axiom Open Modules Concept that drafts a concept about how they want to allow swappable image sensor modules and swappable lens mounts in the Axiom camera the future:

In our first post about the Axiom Open Module Concept (made in Fall 2013), we proposed a solution explaining how different modules could be combined behind the camera head to form a wide range of camera hardware compounds. Now we have prepared an extension to this concept, dealing with the same issue surrounding the components in front of the camera head. Here, it’s not so much about allowing for new combinations but rather to allow for easy access to these parts and for changing and/or replacing them when required. 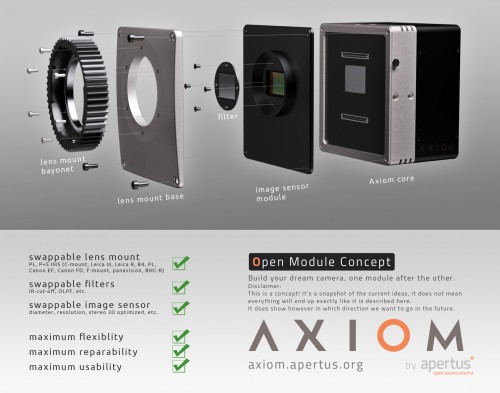