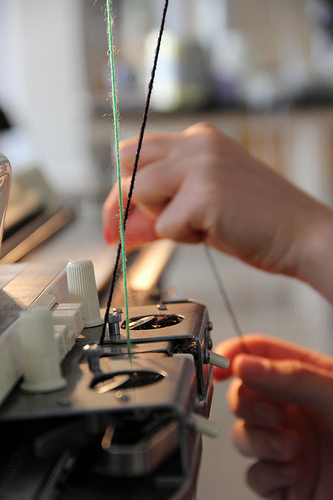 We are an artist duo Varvara Guljajeva & Mar Canet working together in the field of art and technology since 2009. We are developing Knitic project, which began as a residency project at Marginalia+Lab in Belo Horizonte, as an open hardware, which controls a knitting machine via Arduino. We don’t use a floppy emulation or knitting machine’s keypad simulation. Instead, Knitic is the new ‘brain’ of a knitting machine that allows real-time control over the needles. It means, one can knit as long patterns as desired and modify the pattern on the fly. Knitic has been tested on Brother 930 and 940. 970 should be good for Knitic. Other electronic models might need extra work for figuring out the connections and types of encoders. Maybe as well with punch-card ones, this needs to be tested and developed though. How come? Because we do not use any Brother electronics but just sensors’ output and solenoids’ input from the knitting machine.