The Raspberry Pi shop, one month in

By Boris Landoni on March 22, 2019
Tweet
Pin It
Five years ago, I spent my first day working at the original Pi Towers (Starbucks in Cambridge). Since then, we’ve developed a whole host of different products and services which our customers love, but there was always one that we never got around to until now: a physical shop. (Here are opening times, directions and all that good stuff.) 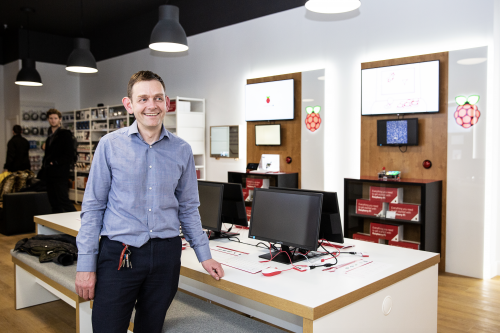 Years ago, my first idea was rather simple: rent a small space for the Christmas month and then open a pop-up shop just selling Raspberry Pis. We didn’t really know why we wanted to do it, but suspected it would be fun! We didn’t expect it to take five years to organise, but last month we opened the first Raspberry Pi store in Cambridge’s Grand Arcade – and it’s a much more complete and complicated affair than that original pop-up idea.

Given that we had access to a bunch of Raspberry Pis, we thought that we should use some of them to get some timelapse footage of the shop being set up.

The idea behind the shop is to reach an audience that wouldn’t necessarily know about Raspberry Pi, so its job is to promote and display the capabilities of the Raspberry Pi computer and ecosystem. But there’s also plenty in there for the seasoned Pi hacker: we aim to make sure there’s something for you whatever your level of experience with computing is.

Inside the shop you’ll find a set of project centres. Each one contains a Raspberry Pi project tutorial or example that will help you understand one advantage of the Raspberry Pi computer, and walk you through getting started with the device. We start with a Pi running Scratch to control a GPIO, turning on and off an LED. Another demos a similar project in Python, reading a push button and lighting three LEDs (can you guess what colour the three LEDs are?) –  you can also see project centres based around Kodi and RetroPi demonstrating our hardware (the TV-HAT and the Pimoroni Picade console), and an area demonstrating the various Raspberry Pi computer options. 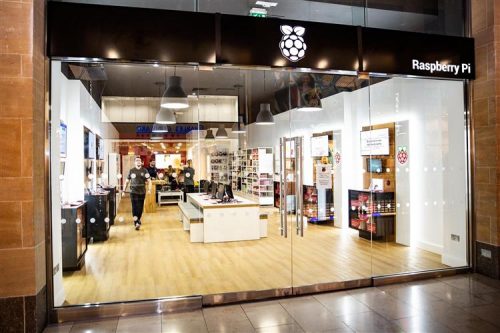 There is a soft seating area, where you can come along, sit and read through the Raspberry Pi books and magazines, and have a chat with the shop staff.  Finally we’ve got shelves of stock with which you can fill yer boots. This is not just Raspberry Pi official products, but merchandise from all of the ecosystem, totalling nearly 300 different lines (with more to come). Finally, we’ve got the Raspberry Pi engineering desk, where we’ll try to answer even the most complex of your questions.

Come along, check out the shop, and give us your feedback. Who knows – maybe you’ll find some official merchandise you can’t buy anywhere else!