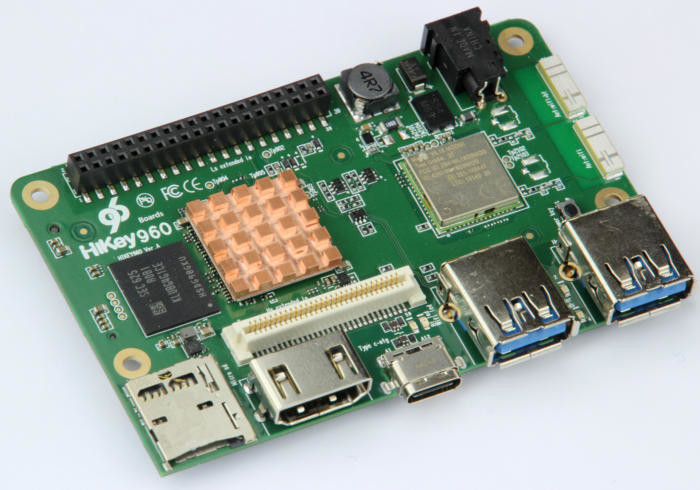 Huawei’s HiKey 960 board is based on its octa-core Kirin 960 chip, which has four high-end Cortex-A73 cores, and four low-power Cortex-A53 cores. It’s the same chip that ships inside the Huawei Mate 9.
It’s not exactly on a level with the Snapdragon 835, but it’s at least a relevant option in the high-end phone space.

The board will be compatible with multiple versions of Linux in the future, in addition to Android.

A relevant limitation of using phone innards for real computers is the shortage of RAM, and the typically slow speeds of the RAM. The HiKey 960 has 3GB of LPDDR4 RAM, which isn’t great, but it’s a big step up over what was available even a year ago, speed-wise.
As for graphics, Kirin’s GPU has enough power for 4K output, but the board’s HDMI port only supports 1080p output.
The board has 40-pin and 60-pin connectors for attaching hardware like cameras, and the PCIe M.2 slot, which should make it easier to add a faster SSD to augment the 32GB of onboard storage.

Actually the ideal use case for the HiKey is for developers working on ARM-based software, like Android apps but it also provides a nice step for Linux world’s aim to build a full-fledged ARM-powered desktop for general use.