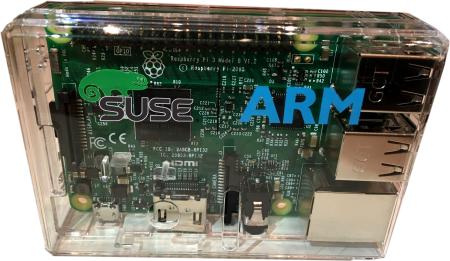 Raspberry Pi 3, with its quad-core ARM Cortex-A53 processor, is our first 64-bit product, supporting ARM’s A64 instruction set and the ARMv8-A architecture. However, we’ve not yet taken the opportunity to ship a 64-bit operating system: our Raspbian images are designed to run on every Raspberry Pi, including the 32-bit ARMv6 Raspberry Pi 1 and Raspberry Pi Zero, and the 32-bit ARMv7 Raspberry Pi 2. We use an ARMv6 userland with selected ARMv7 fast paths enabled at run time.

There’s been some great work done in the community. Thanks to some heroic work from forum user Electron752, we have a working 64-bit kernel, and both Ubuntuand Fedora userlands have been run successfully on top of this.

Which brings us to a great announcement: that SUSE have released a version of their Linux Enterprise Server product that supports Raspberry Pi 3.

Why is this important? Because for the first time we have an official 64-bit operating system release from a major vendor, with support for our onboard wireless networking and Bluetooth. SUSE have kindly upstreamed the patches that they needed to make this work, so hopefully official support from other vendors won’t be far behind.

You can download an image here. Give it a spin and let us know what you think.