Cloud Media has spun a new variant of its Popcorn Hour media player that is open source in hardware and software thanks to its mainboard: Pine64’s open source, quad-core Cortex-A53 Rock64 SBC. It’s available in a Media Computer and NAS (network attached storage) version for the same price of $95.90 (2GB LPDDR3/16GB eMMC) or $115.90 (4GB/32GB), not counting SATA storage.

The only difference between the two versions is that the Media Player version is preloaded with stock Android 7.1.2 firmware with RKMC, a Rockchip optimized media center stack forked from Kodi 16.1. Both the Media Player and NAS models let you download other Rockport-supplied Linux and Android distributions from Pine64’s Rock64 repositories. You can also load the lightweight Lakka retro gaming distro, which is built on the RetroArch emulator.

The Popcorn Hour Transformer hardware is a modified version of Pine64’s Rock64 SBC, providing access to all the major ports, and adding a SATA interface and room for a 2.5-inch HDD cooled by passive cooling fins. Cloud Media has also added an IR remote control, an aluminum case, and a 5V3A adapter with US and EU power cables. 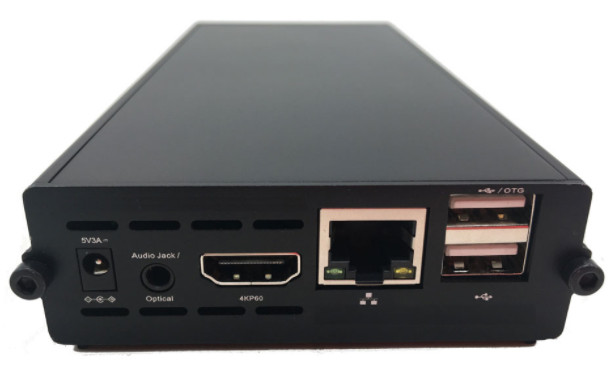