It’s already several years that we talk about open source software, as a winning approach. By now, even the most conservative CTO, or the slowest public organizations agreed to give back to Caesar what is Caesar’s: open source software is generally more mature and malleable, it can be tweaked and adapted more easily, it keeps getting better within time.  Well how otherwise would free and open source software are the thing that actually powers much of the internet? In the wake of the “open” model’s success in software development, more than a decade ago around 1997, first in the United States and then a bit all over the world groups and associations are born that promote their point of view on what it means to create “hardware” (tangible goods, electronics, mechanics) in an opensource sauce. As we already explained on this blog in several opeds, despite we often use the same words to describe it (open source of course, or just “open”) the differences between the world of bits and atoms are very radical: to build a circuit board or a 3D printer, or even an OpenWheels, is very different from pushing a button and compile few lines of code into an application. It was exactly to answer to the many questions that have arisen over time and to develop shared practices and question of the impact or the legal implications of licensing that OSHWA – the most important international association that deals with open source hardware – created almost five years ago, the first open hardware summit. Now after New York and Boston today, for the first time, the Summit will finally be in Europe (in Rome during Rome’s Innovation Week) just before the European Maker Faire, and for the first time will also be totally open to the public.

The Open Hardware Summit is an annual conference, the first fully dedicated to open hardware, and is place to discuss and draw attention to the Open Source Hardware movement, growing rapidly. Among this year’s speakers will have world-renowned leaders from industry, university and the community of makers.

The talks will cover a wide variety of topics ranging from electronics and mechanics to related fields, such as digital manufacturing, wearable technology , devices quantified self, art and biohacking. The workshops will focus on issues such as education, manufacturing, engineering, business, and legal issues and more. The Summit is like a microcosm of the Open Source Hardware community: provides a meeting place that wants to be as inclusive as possible. Along with eight keynote speakers – among which we can already confirm for example Gabriella Levine, president of OSHWA (you can find her interview here),the guru wearable computing Becky Stern, Tomas Diez, FabCity project leader and visionary of the city transformation in the age of digital fabrication (again, interview available here), Adrian Bowyer,father of the RepRap project that has revolutionized the 3D printing (interview available here) there will be innovators from around the world.

Indeed, a call for speakers is open (for now, until May 25) for all those who wish to apply to submit a talk for day 1 or a workshop, to be held on day 2 of the event. From this call we will select at least twenty other contributors to help us create an Open Hardware Summit that looks really to impact and fundamental changes in the manufacturing and production. No surprise therefore that the subtitle we gave the event this year is “From Open Making to Open Manufacturing”

What does it mean to create Open Hardware

Create an “open” hardware is a non-trivial process: it covers the way you provide access to project designs and construction plans but is also about how the “developer” is able to understand how the product is assembled and how it works – and this is generally a problem of documentation, manuals, instructions. Finally it’s also about the availability of appropriate programs and tools for the examination and modification of available projects that are in turn open source and do not cost thousands of euros. The fascinating advancements of so-called “digital fabrication” technologies are now narrowing the differences between the world of atoms and that of the bit: more and more often you’ll be just able to press a button and produce a tangible artifact, with ever-changing materials and ever-increasing precision. Nowadays, as the evidence of ambitious projects like Phonebloks (who wants to create a world of open source, modular electronics and that is working with Google’s Project Ara and other major brands – see our interview to the founder Dave Hakkens) or as OSVehicle, an ambitious project for an (Italian) open source car, to talk about open source hardware is to talk about open manufacturing – the innovative model where all produce for all, with interchangeable pieces to create unique products that meet the needs of the user. 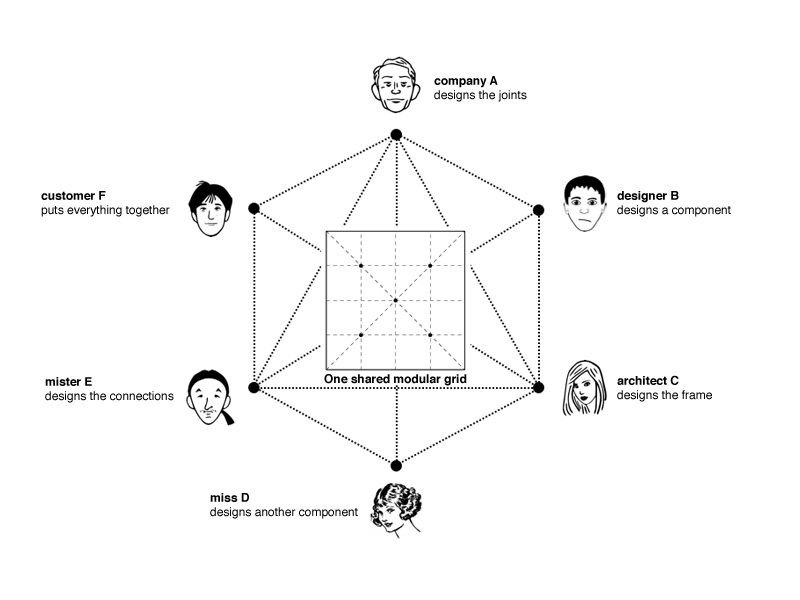 Nowadays, open design is the major player in the world of making. While Italians can be proud of Massimo Banzi’s Arduino the DIY electronics revolution, is now being joined by exciting new projects in open source that are revolutionizing other more or less complex worlds such as that of car manufacturing or furniture creation. OpenDesk, for example, is a marketplace where you can download open source projects for furniture (mainly tables and chairs for now), ​​possible by the use of simple CNC machines now commonly available in Fablab throughout Italy. You can build great cars specimens of furniture design, or contact the laboratories, which can realize for you, approach followed also by the Italian Slowd.

(ed: Alicia pointed me to the fact that the totality of OpenDesk projects on the website right now is under a NC license which makes it not really opensource. Checking)

Which role in the manufacturing processes? How to transform the city into productive hubs?

Finally, these days, we are foreseeing changes in manufacturing: experiments are in place to move away from the classical large-scale production approach and switch to mode modular products. The recent announcement of 3D Systems, partnering with Project Ara to build components which embed electronics is just emblematic. In Barcelona, ​​it is assumed that the city will returns a key protagonist of production, with a new cycle. As Tomas Diez (OHS Keynoter) eminently explained last year at Rome Maker Faire “despite we have computers and the internet we still have a production based on centralised approach. Product In – Trash out. What if we add distribute production to the picture? We have a new model that is called Data in – Data out: that’s the vision behind Barcelona FabCity project. Is about trying to create distributed hubs of production.” In this perspective, we are at a crucial moment: European mechanical and manufacturing excellence must be able to have their say with more conviction and connect with the open and creative community. A real connections between the makers movement – too often centered on the United States – with European production stakeholders is key as we have so many manufacturing and production excellence in Europe. That’s why we are inviting relevant stakeholders to the summit: large manufacturing companies, universities, policy makers: we will put them in front of the pioneers of open hardware in the hope to overcome question marks and with the aim to bring under attention the issues of access, sustainability, reuse and “cradle to cradle” production (the production that looks at products, from birth to full recycling). Recent IPCC data urges humanity to change the production and consumption models, to lessen the impact of logistics processes and make them fully sustainable, local, agile: is not just an option but an obligation. We can obtain the necessary results only if the production will become a participatory phenomenon, if we learn how to give a longer life to the objects that we produce, to fix them, adapt them, produce them locally. Open hardware will definitely have a role in enabling this transition towards an open and sustainable manufacturing, that for sure will also be related to much needed changes in our present and future habits as consumers. So, see you in Rome, September 30th and October 1st, to talk about the future of Open Hardware, the future of production in cities, the future of industrial manufacturing. To talk about the future, indeed. Don’t forget to apply to the call: http://2014.oshwa.org/participate/