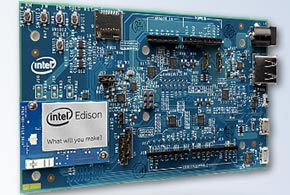 Intel officials at the upcoming Embedded World 2016 show will roll out a broad array of hardware and software that will make it easier for developers to create new products for the Internet of things. The chip maker will unveil new developer kits, software tools and modules that will reduce the complexity around creating Internet of things (IoT) devices and services and cut the time it takes to bring them to market, according to the company.

“The Internet of things … has enormous potential to drive both economic growth and social change,” Ken Caviasca, vice president in the Internet of Things Group and general manager of platform engineering and development at Intel, wrote in a post on the company blog. “With 85 percent of technology still unconnected, and security threats pervasive, it is still very much the Wild West with vast new territory to explore. … Once the hurdles are out of the way, developers will find they can instead focus on the fun stuff—innovation, imagination, and exploration of all the possibilities IoT has to offer.”

At the show next week, Intel will add to its lineup of IoT developer kits based on the vendor’s IoT Platform that are designed to help developers bring their ideas from prototype to production, Caviasca wrote. Among the new offerings will be the Quark Microcontroller Developer Kit D2000, based on Intel’s tiny, low-power Quark processor. In its booth at the show, Intel will display an IoT solution based on the new developer kit created by Hanhaa, a small IoT company working out of the United Kingdom.

Intel also offers an IoT developer kit that works with both the company’s Galileo and Edison development boards. For embedded products, the chip maker is unveiling the new Intel IoT Gateways and Intel Expansion Kit with MinnowBoard MAX, and the highly customizable MinnowBoard MAX-compatible board, called the MinnowBoard Turbot.

The Minnowboard is an open-source hardware reference platform powered by a 64-bit Atom E38xx Series system-on-a-chip (SoC) from Intel.

In addition, the company is working with Telit, which develops wireless machine-to-machine (M2M) technologies, to build IoT modules based on Intel’s Atom x3 chip. Two modules feature integrated application processing with such options as WiFi, BT, global navigation satellite system (GNSS), or cellular capabilities. The modules developed with Telit will be available late this year.