A couple of years ago, The Oatmeal launched an indiegogo campaing to buy the property of Nikola Tesla’s former laboratory, in New York.  The campaign was successful as it raised $1.37M. With a combined grant from NY State for an additional $850K, this money was used to make a bid on the property, and the lab was saved, now it’s time to build a Museum entitled to possibly one of the greatest genius of electromagnetism.

Thanks to the 33,000+ wonderful backers who supported the cause, the non-profit behind this project now owns the property of Nikola Tesla’s former laboratory at Wardenclyffe.

This initial round was enough to buy a laboratory, but not enough to actually BUILD a museum. So, earlier this year I wrote a cartoonist’s review of my Tesla Model S, wherein I asked Elon Musk to donate the remaining amount needed to restore Tesla’s lab.

via Buy a Brick for The Nikola Tesla Museum | Indiegogo. 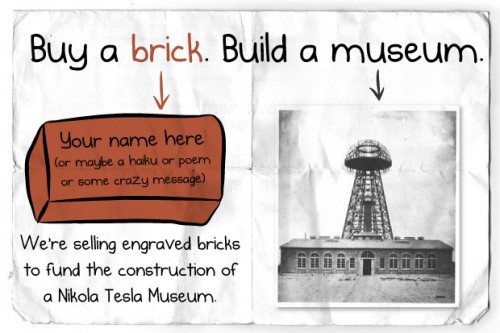