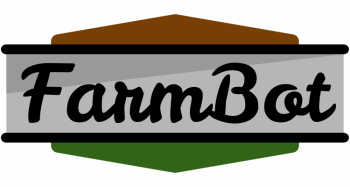 If you have not yet discovered project Farmbot, this interview will be a revelation to you. The project in question, has the ambition to bring digitalization into one of the oldest processes in society, that of agriculture.

The vision behind “precision agriculture” is particularly interesting and so Open Electronics decided to interview Rory Aronson, the creator of the project. Rory gave us a few more details than available online up to now and helped further increase the interest that we have in this project, we are pretty sure that this interest, will be yours too.

[Open Electronics] Hey Rory, could you tell more about you and the story before FarmBot? How did you actually arrive to design this project?

[Rory Aronson] I have always been interested in many fields, from transportation, to food production, to sustainable energies, to mobile technologies. So in 2010, while studying Mechanical Engineering at Cal Poly in San Luis Obispo, I decided to take an organic agriculture class to fuel my interest in the food system. A guest speaker shared with our class about his new tractor, one that could selectively till the ground, destroying all of the weeds but not harming his lettuce plants. Upon seeing that idea, a spark went off in my head for a system that was better, and that was the humble beginnings of FarmBot.

Over my remaining two years in school, the project just sort of sat in the back of my head, waiting for me to find the time to put a good foot forward. I sketched every now and then, built a basic prototype for show purposes, and completed some research, but nothing too extraordinary.

Now, I am graduated and have found the time and motivation to move forward with the project. Things are beginning to move quickly, and it is exciting!

[Open Electronics] Currently, is it only you behind this project or is there a team behind it? How did you fund working on design and prototyping?

[Rory Aronson] For a long time it was only me working on the project. I had attempted to get other students interested, but they were mostly turned away by the sheer scale of the project, the uncertainty, and the time commitment. It wasn’t until just a month ago after publishing the FarmBot white paper that others started to jump onboard the team. Now there are about four people on the team, but we are always looking for more, especially programmers. 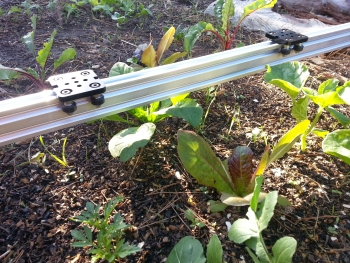 [Open Electronics] How would you describe FarmBot in a tweet (or in general in few words, for the average non-expert person)?

[Rory Aronson] FarmBot is an open-source automated farming machine. Picture it as a giant 3D printer outfitted with a seed injector, sprayer, plow, and sensors.

[Open Electronics]  Would you describe and explain the concept of Precision, Data Driven Agriculture and the major positive impacts this could have on some key aspects like, land productivity, sustainability, environmental issues, resilience etc…?

[Rory Aronson] Precision agriculture, as I define it, requires knowing exactly where the plants are located, and tending to each one in a precise way. Because FarmBot is computer controlled and each plant is sowed and tended to individually, it is a precision farming machine.

Having such a high level of precision gives us a couple of enormous benefits. The first, is the unlocking of “Big Data” in agriculture, enabling data-driven decisions to be made. Combining soil and other data from many points on the farm, with other data streams such as historical data, yield data, and weather data, FarmBot can optimize how it grows each individual plant throughout its life cycle. Optimization and efficiency gains will come in the form of smarter watering, plant spacing, timing, application of pesticides and fertilizers, etc. And we all know that we need to be using less water and controlling groundwater pollution as much as we can.

The second benefit, is the ability to grow highly variable polycrops with a machine, without losing machine efficiency. This is only possible with FarmBot because each plant is sowed and tended to individually, like a human hand does. Polycropping enables the plants to work symbiotically with each other, attracting beneficial insects, providing nutrients and shade for each other, etc, all while building the soil’s fertility and reducing the need for external inputs. In addition, polycrops are more resilient to crop failure because they are closer to a natural system that just takes care of itself if properly designed.

[Open Electronics] Can we say that FarmBot is among the first step towards abundant agriculture and post-scarcity in food?

[Rory Aronson] I think so! By eventually removing human labor from the food production process without sacrificing the sustainability and integrity of the system, the price of good food should drop dramatically. In addition, if the FarmBot technology is adopted on a small scale, it will allow for a distributed food production system, adding to the resilience of the system and the self sufficiency of the FarmBot owners. 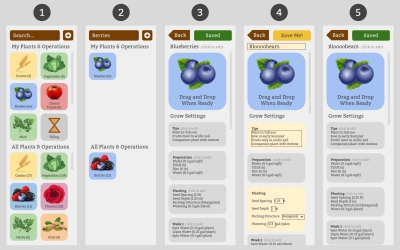 [Open Electronics] What use case and scenarios do you envision for this tool? Is designed to be used in small resilient communities searching to secure food supply or rather in large scale, intensive agricultural scenarios, like those related to food corporations? Is some of these players already showing interest towards the project?

[Rory Aronson] The best use cases for FarmBot have yet to be determined, but my hunch is that it can be used on all scales. I am building the first prototype on top of a 1.5x3m raised bed in my backyard, and I will optimize the hardware to be affordable on a scale this small. From here, I hope that the same design will scale to a backyard, a greenhouse, an urban rooftop, and even a small commercial farm! A large commercial farm or an industrial setting will likely need a different design, but I think the same design intentions will still apply.

Personally, I am not very interested in working on the project on a massive scale, but everything is open-source, so if someone else wants to apply it there, they can go right ahead.

[Open Electronics]  What’s the status of the project right now? In particular, are some actual agricultural testbeds already in place? Is the machine already available as one or more prototypes?

[Rory Aronson] I am currently building the first prototype on a 1.5x3m raised bed in my backyard. The hardware is nearing completion, but then software will take quite some time to develop. 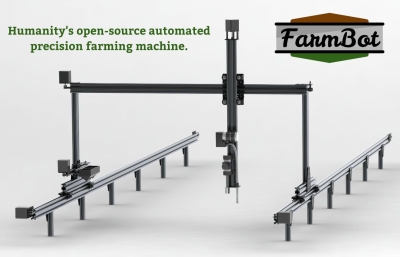 [Open Electronics]  What’s the most challenging aspect (I guess it’s mostly technical) of building such an amazing and ambitious machine with a so complex usage context?

[Rory Aronson] The software will be a big challenge to make both powerful, and user friendly. There are many components that need to work together and we need people working at it from all angles. We are aiming to make this technology both open and accessible, allowing anyone to own and operate a FarmBot.

[Open Electronics]  Will both documentation related to Machine designs (hardware) and software (firmwares, web interface program) be made available in open source?

[Rory Aronson] Yes. Everything will be open-source, from the hardware design, software source code, to the public plant data. 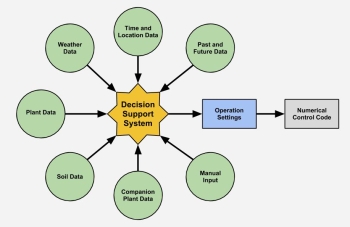 [Open Electronics]  What’s the sustainability (or let’s call it “business model”) that you hypothesize behind FarmBot? Is it all about the crowdfunding campaing needed to bootstrap the project itself and then leave it to the community? In this case, do you expect a huge community of potential users? What are the customer segments you have in mind?

[Rory Aronson] Initially, I am running off of donations to fund development and working towards a crowdfunded launch. From there, the plan is to largely leave the project with the community, with the potential for me and/or anyone else to sell FarmBots to those who do not want to build one themselves. This model is similar to the RepRap 3D printer project and the successful spin-off companies such as MakerBot that have come out it.

For the crowdfunding campaign, the product will be a FarmBot kit optimized for one’s backyard. It will be targeted at the maker/hacker/DIYer type people who want to grow food, but want a gadget to help them out. The system we’ll ship will be ready for hacking, meaning that it will be designed for others to augment and modify everything from the hardware to the electronics to the software to the data, in hopes of building the community and the technology further.

[Open Electronics]  Did you ever get in touch with projects such as the french Adabio Autoconstruction and Open Source Ecology (that is related to agriculture as well as with the LifeTrac and other projects). In general, are you part of the open source hardware community?

[Rory Aronson] I have not been in contact with either of these organizations, but I do follow the Open Source Ecology Project and love what they are doing. I have even imagined FarmBot becoming one of the OSE machines!

In general, I very much appreciate open-source projects and would consider myself a part of the open-source movement and community, with FarmBot being my first major contribution.

[Rory Aronson] Completing the first FarmBot in my backyard and finding programmers to write the various code bases are the top priority. In addition, I need to find more funding to expedite development and purchase more hardware