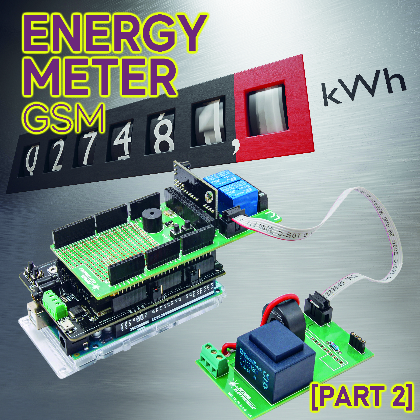 It monitors the electricity consumption and sends the detected data to the cloud through the GSM cellular network; it is based on an Arduino Mega equipped with GSM Shield and a board on which the measurement board is mounted. Second and final instalment.

In the previous post on Open Electronics, we have proposed the realization of a project created to monitor electricity consumption through a board for detection of voltage and current in the plant, entirely managed by an Arduino Mega 2560 board equipped with a GSM Shield, which implements the data connection on mobile radio network aimed at sending to a remote server of the detected data.

Physically, the project is composed of a sensor board that mounts the classic current transformers (TA) and voltage transformers (TV) on, which can take place in a particular female strip; the module Energy Meter FT1346M is equipped with a 2.54 mm pin pitch, as well as a shield made to be applied to Arduino Mega 2560 or Fishino Mega board; in addition, there is a GSM Shield for mobile data connectivity.

The project offers two possibilities of use: the configuration just described is the one for the application proposed in this article, i.e., the hardware managed by Arduino/Fishino Mega, and provides that the board with TA and TV transformers is a simple sensor of the parameters of the electrical power and is interfaced through the appropriate connector and its flat-cable to the GSM Energy Meter shield. This configuration allows the Arduino/Fishino Mega to acquire and process absorption data and the eventual sending via GSM/GPRS network.

But it is also possible to use the TA-TV board alone in combination with a Personal Computer. Still, the FT1346M module must be plugged into its female strip and not into the Energy Meter shield as in the complete configuration with Arduino.

The heart of the measurement is the FT1346M module, which needs the board with the TA and TV transformers. Still, it detects the corresponding voltages and determines phase, power factor, instantaneous absorption, apparent power, active and reactive, simply by analyzing the relationship between the waveforms provided by the two transformers. It is then the FT1346M that communicates the data to the computer through the interface connector.

The FT1346M is based on the MCP39F511 integrated circuit, which uses a sampling algorithm that takes a finite number of samples per cycle of the mains AC. The accumulation interval of the samples is given by the integer value 2N, which identifies the number of line cycles on which you want to sample and consequently perform calculations. For example, with N fixed at five, you have that the line cycles on which you will perform sampling and computation will be 32.

Well, after this summary of the project and a brush up on the operation of the integrated circuit that measures the power parameters, let’s pick up the conversation from where we left off in the first episode (in which we explained the hardware and the library for Arduino) that is the sketch that has been prepared to use the project in its full version, that is with the Energy Meter shield.

The sketch, written to work on the Arduino Mega 2560 or Fishino Mega boards, is proposed as a first approach to using the new MCP39F511 management library. This is divided into six separate files that we will comment on below: 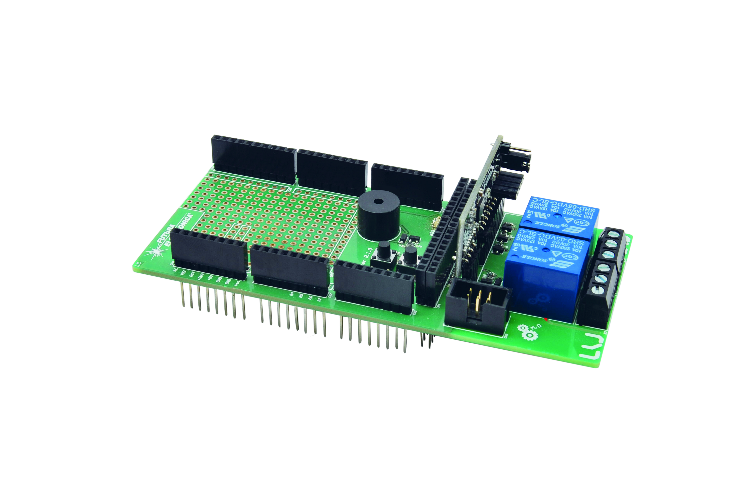 Let’s analyze the main file “Test_MCP39F511,” where at the top we find a series of constants declarations, including the I/O to which are connected both buttons and relays, as well as LEDs and buzzer. These I/O are only available on the Arduino Mega 2560 boards. This is followed by a series of constants for managing the state machines used in the sketch and output I/O management.

We have then defined a constant threshold beyond which the system goes into alarm (500 W, modifiable by pressing the button P1, which we will discuss later) and an offset constant that, combined with the previous one, puts the system in pre-alarm.

This is followed by string constants to be used for printing on the serial monitor some information and the electrical measurements taken. Finally, we have the declarations of the state machines used and the variables needed for the sketch to work. 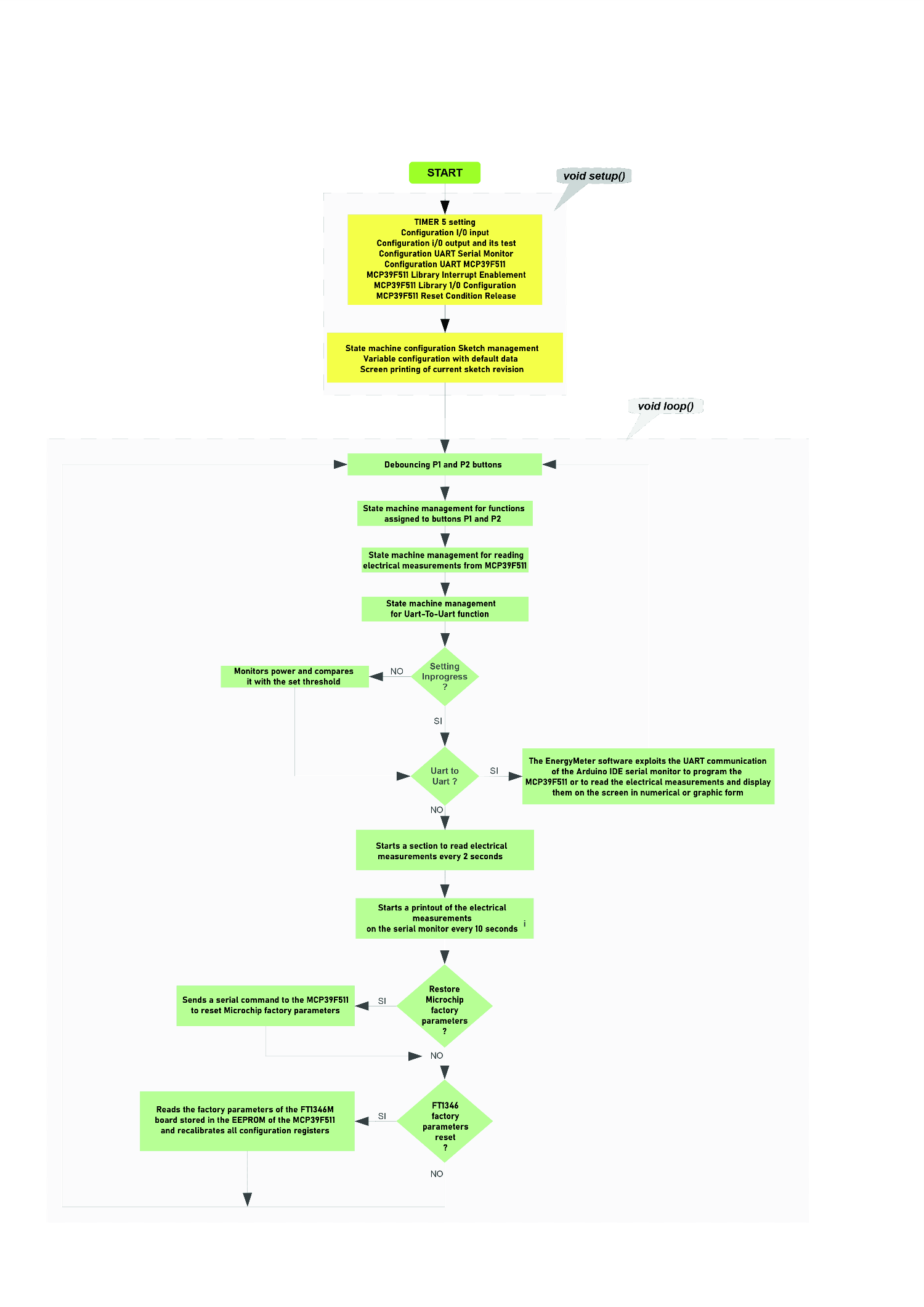 Once initialization is complete, the system enters the “void loop()” function where the following functions are executed (see the second section of the flow-chart):

Suppose the intervention thresholds are not being set using button P1. In that case, the function of monitoring the active power engaged concerning a preset intervention threshold is carried out to warn using an acoustic-visual signal when the power threshold is exceeded. The system only warns of the overrun and does not act on the two relays on the board, which can be energized or de-energized by pressing the buttons P1 and P2. If a threshold configuration is in progress by pressing button P1, this function is ignored until initialization is complete.

If the EnergyMeter software is running, it can take advantage of the UART of the Arduino IDE’s serial monitor to communicate with the MCP39F511 IC. In other words, the UART of the serial monitor acts as a bridge between the software and the integrated. In this way, you can configure the registers of the integrated unit or read the electrical measurements directly and display them on the PC monitor. This functionality has been named Uart-To-Uart. If it is not active, the flowchart continues with the following available functions. Otherwise, it returns to the head, repeating the above functions.

The system, every two seconds, begins a session of reading the registers containing the electrical measurements. In other words, it activates the read state machine seen in the previous points.

If you are not running a readout session, the electrical measurements are printed on-screen on the serial monitor every ten seconds.

This concludes the description of the main loop. Let’s then consider the management of the P1 and P2 buttons.

If pressed for a period of less than 1 second, pushbutton P1 energizes/de-energizes the corresponding relay K1; the same applies to pushbutton P2, but it refers to relay K2.

Button P1 is associated with the function of setting the intervention threshold. The default value loaded at power-up is always 500 W, with an offset of 100 W.

This means that if 500 watts are exceeded, the system goes into alarm (red LED LD1 ON; the buzzer emits an acoustic signal to warn that the threshold has been exceeded), but if it remains below 400 W, the system is in normal conditions (green LED LD3 on). Between 400 W and 500 W is pre-alarm (yellow LED LD2 lit).

Changing the threshold value changes the trigger point, while the offset remains unchanged.

So the thresholds that can be set by button P1 are as described below.

The LD1 LED lights up to indicate the FT1346M factory parameter reset selection. When the button is released, the procedure is started. In addition, a string is printed on the serial monitor to indicate what has been done.

On the other hand, if the P2 button is pressed for at least 6 seconds, the Microchip factory parameters are restored by sending the appropriate serial command. The LD2 led lights up to indicate this selection; when the button is released, the procedure is started, and the string denoting the successful restoration operation is printed on the serial monitor.

As for the electrical measurements handled by the sketch, we have the following: 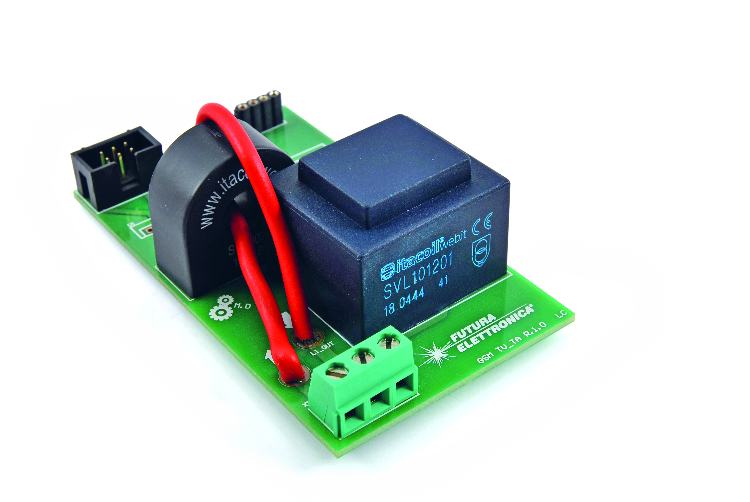 As for the power factor, you must also call the Cmd.CalcPowerFactor() function calculates the correct value since the data read is in two’s complement. When the electrical measurement is printed on the serial monitor, it is adjusted according to the decimal places assigned to the various measurements. For example, for RMS voltage measurement, we have:

Then the read value of the RMS voltage, saved in the appropriate library data structure, is divided by a power of 10 and so on for all other measurements.

Let’s make one last consideration: at the top of the file “Test_MCP39F511“, there is a directive to the compiler named “ONLY_SOFTWARE_ENERGY_METER.” This is usually commented out and therefore disabled. When you remove the comment and recompile the sketch, you will have that the only active function in the “void loop()” will be the “Uart-to-Uart” function for the configuration of the measurement board using EnergyMeter software R.1.0.4.0 or higher.

Let’s conclude with some brief comments on the new version of the software EnergyMeter R.1.0.4.0, which provides a series of commands for managing the EEPROM memory of MCP39F511.

Fig. 2 shows the new interface of the software, where we have highlighted in red the new commands created that we are going to describe: 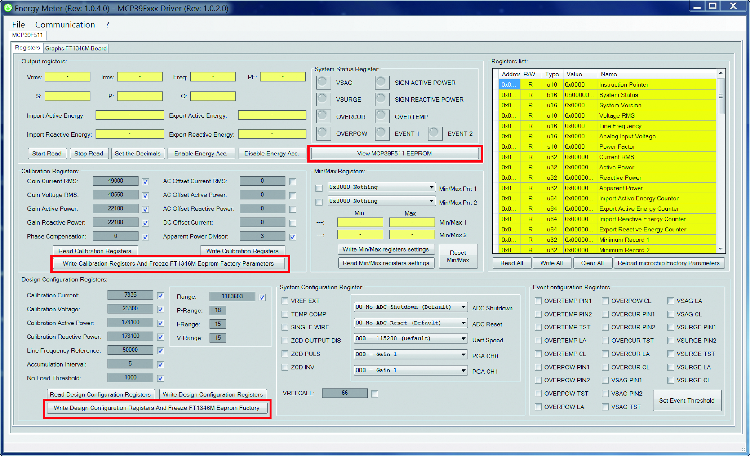 Fig. 3 highlights the EEPROM memory management window; the table shows the data eventually stored in the memory. As already widely said, this is divided into pages. Each page is composed of 8 Word for a total of 16 bytes.

On the right of the user interface screen, instead, we find the commands to read, write or erase the EEPROM memory of the MCP39F511 integrated circuit mounted on the FT1346M measurement board. Specifically, we have: 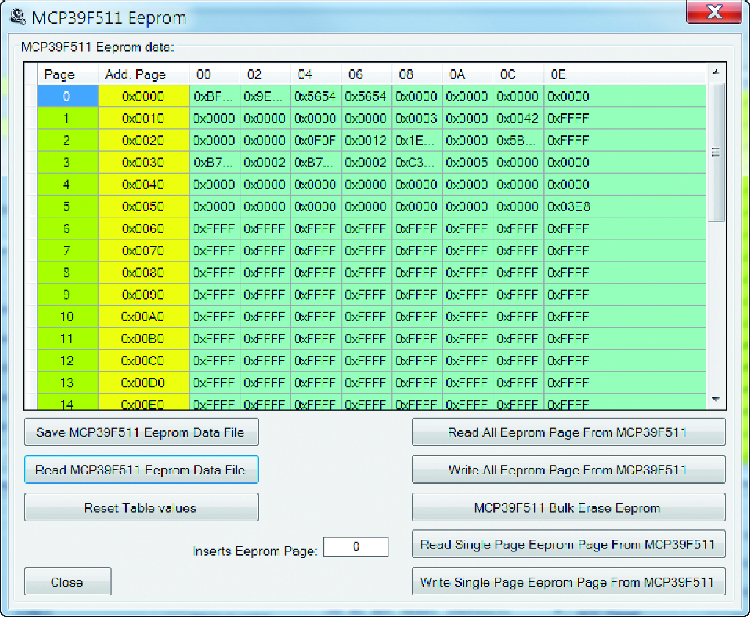 Last but not least, we have the configuration window of the settable thresholds of the MCP39F511 integrated circuit. 4 shows the new window with the latest available command (in the software release we are describing) highlighted in red, which allows us to write the threshold values in the appropriate registers and to save them in the EEPROM memory. 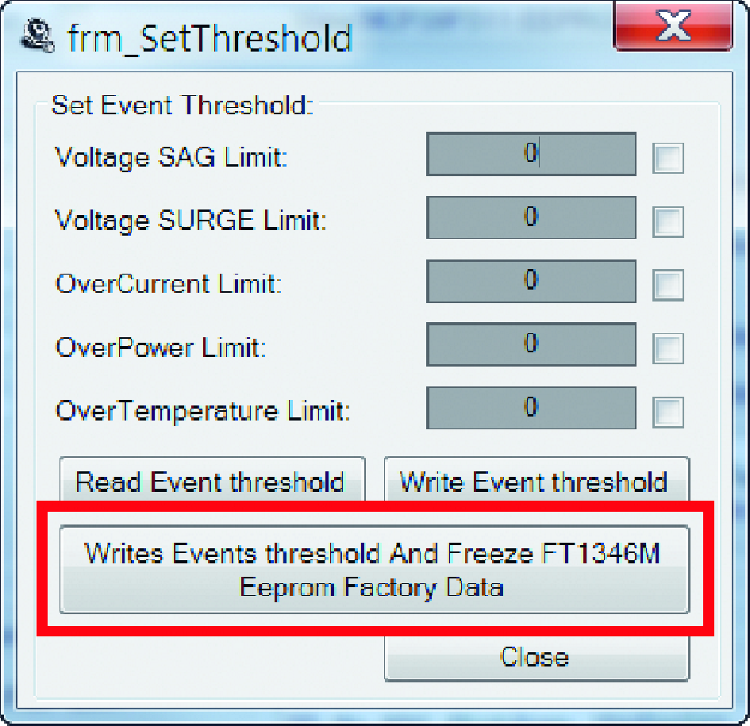 With this, we can say that we have concluded the discussion of the Arduino library for managing the MCP39F511 integrated circuit in all its forms and a thorough manner. Thanks to this piece, we can now move on to integrating the same in a data management system with our GSM board or any other electronic board for interfacing to a database for the management and display of electrical measurements acquired. We will be developing an application of the system with other hardware in the future, so follow along.