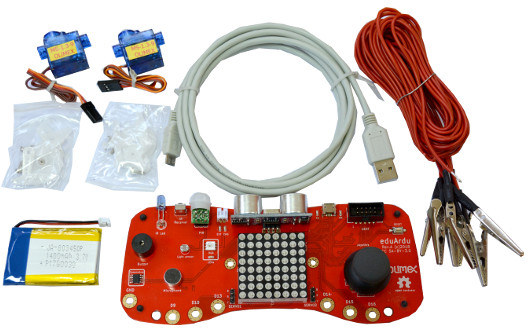 Olimex has recently launched eduArdu, an open source hardware Arduino compatible board specifically designed for education with plenty of buttons, LEDs,  and sensors, as well as tutorials and samples source code to help young and older aspiring makers get started with Arduino programming.

An ATMega32U4 AVR microcontroller provides the computing muscle, just like it does for the Arduino Leonardo board. From there, eduArdu adds a built-in microphone and buzzer, a thumbstick and six buttons, an IR receiver and an IR transmitter, and RGB and status LEDs.

Features of the eduArdu Arduino development board include :

eduArdu Arduino development board is available to purchase price of just €15 direct from Olimex. They also offer a quick start kit that includes a 1400mAh battery pack, USB cable, a handful of alligator cables for making quick connections. It’s priced at €30.