Do you need a pretty nifty synth instrument? OKAY, I got what you need 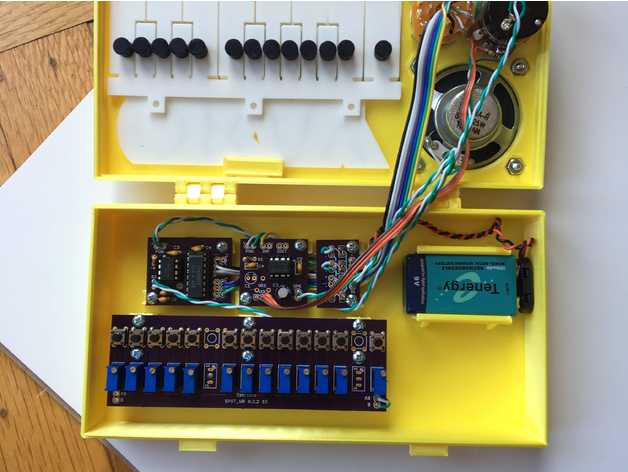 Okay is a nifty synth instrument made entirely from 3D printed parts which were designed in OpenSCAD and printed on the maker’s Prusa i3 MK2 3D printer.

“With a name like ‘OKAY’ you might guess that functionality is intentionally limited. There’s just one octave of keys, a volume/power control, and an octave rotary switch to select from six different octaves. But what the OKAY lacks in features, it makes up for in accessibility; it uses standard, off-the-shelf electrical components and can be put together in about an afternoon.”

Inside the 3D printed casing—which cleverly opens up like a box—is a relatively simple electronic assembly that consists of an LM555 timer, a CD4040 ripple-carry binary counter/divider, and an LM386 power amplifier.The various components are distributed into four small PCBs, each with a different role.
They are: a power bus, which switches and distributes power from the 9v battery to the other PCBs and LED; a timer and divider PCB which acts as an oscillator and frequency divider while providing a 12-octave output; the keybed PCB which activates the keys and sets the LM555 timer’s frequency; and the amp component, which is basically your run-of-the-mill headphone amplifier circuit.

The synth does have some limitations:

– it is monophonic, only one note can be played at once
– analog, limited type of sound emitted
– square-wave output, meaning it has a “hard” sound