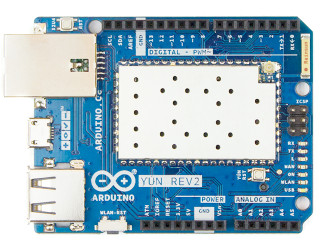 Arduino has launched the Arduino Yun Rev 2, a rev of the original OpenWrt-driven Arduino board with enhanced LAN, USB, security, and power supply features.

The board is once again equipped with an Ethernet port, USB host port, and microSD slot. However, the 10/100 Ethernet port has been switched to a new model that avoids accidental short circuits when using certain Arduino shields. The USB hub has also been improved, and the USB port has been flipped from vertical to horizontal to make for a more compact profile.

A micro-USB client port is used for a power input to the much better, more robust power supply, and 4x LEDs are available. The board appears to have the same 73 x 53mm dimensions as the original.

The Yun 2 is now available for 42.99 Pounds ($57) excluding VAT at RS Components, with shipments due in mid-August. 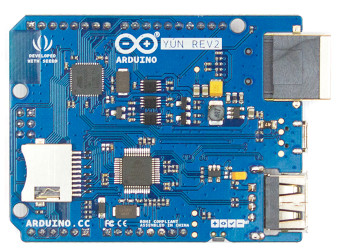