Still don’t get 100% of how it works  but, from the video here it seems amazing! And it’s open source. Spotted on Wired!

At first, the monome was meant be a multipurpose artistic tool: a simple, 100 percent open source design with buttons and lights that could be programmed to to create any kind of art, from music to games. In fact, in every functional way, it still is—it’s just that the people it attracted tend to be mostly musicians.

A monome is a simple box, the size of a textbook (or bigger, depending how you build it), with anywhere from 64 to 256 light-up buttons on its face—it looks like a game of Simon on steroids, or a reallyuniversal remote control. It doesn’t do anything by itself, and the buttons don’t necessarily light up when you push them—like a game of Simon on narcotics, or a remote control you spilled a drink on.

But once it’s hooked up to another device (usually a computer) via USB cable, you can use software (like MLR, the program Weitekamp uses) to tell it what you want it to do: When you press a button, the monome sends a signal to the software, which will both respond and/or a signal back to light up any number of buttons (the buttons themselves are on a completely different circuit from their light bulbs). Used as a musical instrument, the monome can split a single sample into equal fractions across a row of buttons; conceivably, you could add a sample for every row of buttons and loop them top of each other, like weaving a giant musical tapestry. It’s mainly used as a performance tool, to add manual functionality to music that’s often and easily automated.

The Monome: A Music Hacker’s Dream Instrument, and a Collector’s Fantasy | Underwire | Wired.com. 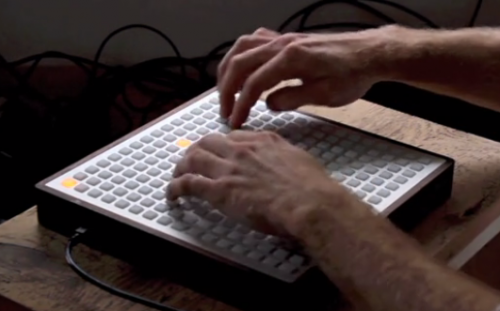