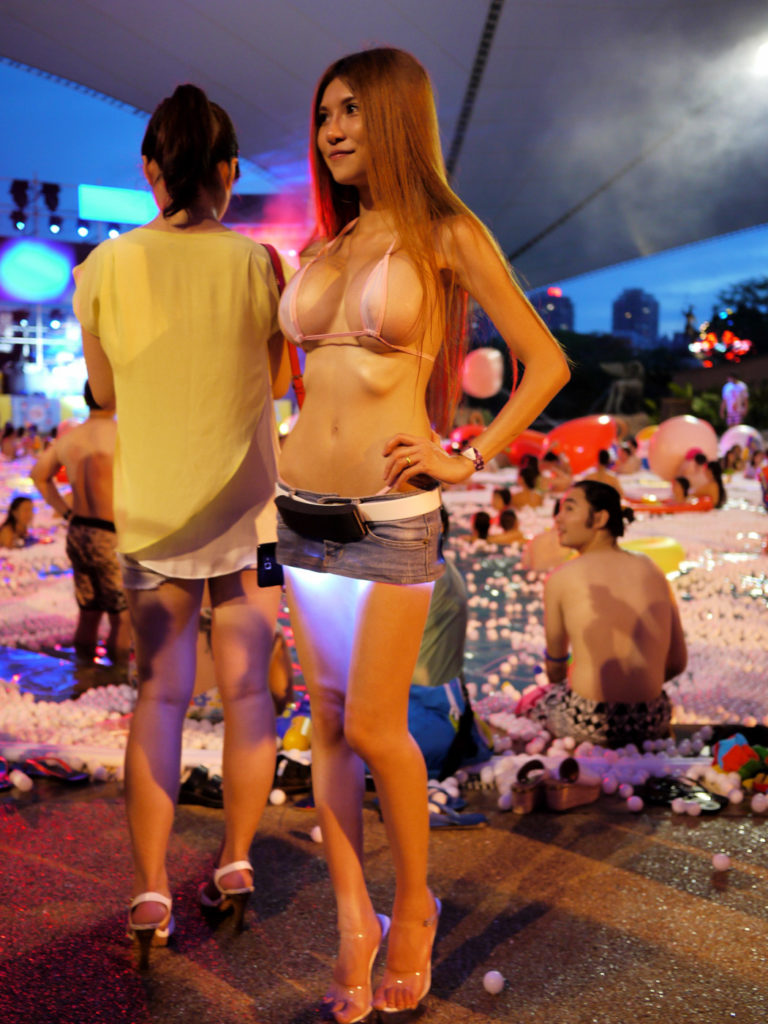 Among the most famous and influential women in the world of Makers, there is certainly Naomi Wu. Many of you know her with the nickname “SexyCyborg“.
We wanted to interview her to understand how she has achieved this popularity and to understand what she thinks of the OpenSource world.

Boris Landoni – You are a star in the social world. In you channel YouTube you have more than 75K subscribed people, on TW more than 22K followers. How do you explain this success?

Naomi Wu – There are physical factors of course, but I think strategy and following best practices also play a role. I didn’t have the most comprehensive education so I never really assume I’ll just be able to pick something up and be good at it. As with hardware and coding, when I got on YouTube and Twitter I did as much reading and research as I could. Of course like anything else some things are more effective than others- and why waste time figuring out what other people already have and are sharing that information? I often joke my super-power is reading instructions- and for Social Media strategy that’s what I did.

Boris Landoni – Your “social name” is @RealSexyCyborg or @SexyCyborg. Indeed, in your videos and photos, you wear very sexy clothes. For a choice of life or to be more “visible” in a world often reserved for men?

Naomi Wu – I dress like that all the time- it became part of my online brand but that’s just an added benefit. Yes, visibility is important to me. There’s a price and my chosen appearance has certain closed some doors and opened others, overall its been positive. I can’t complain, lots of people- particularly larger people have to put up with far worse than I do because of their appearance. 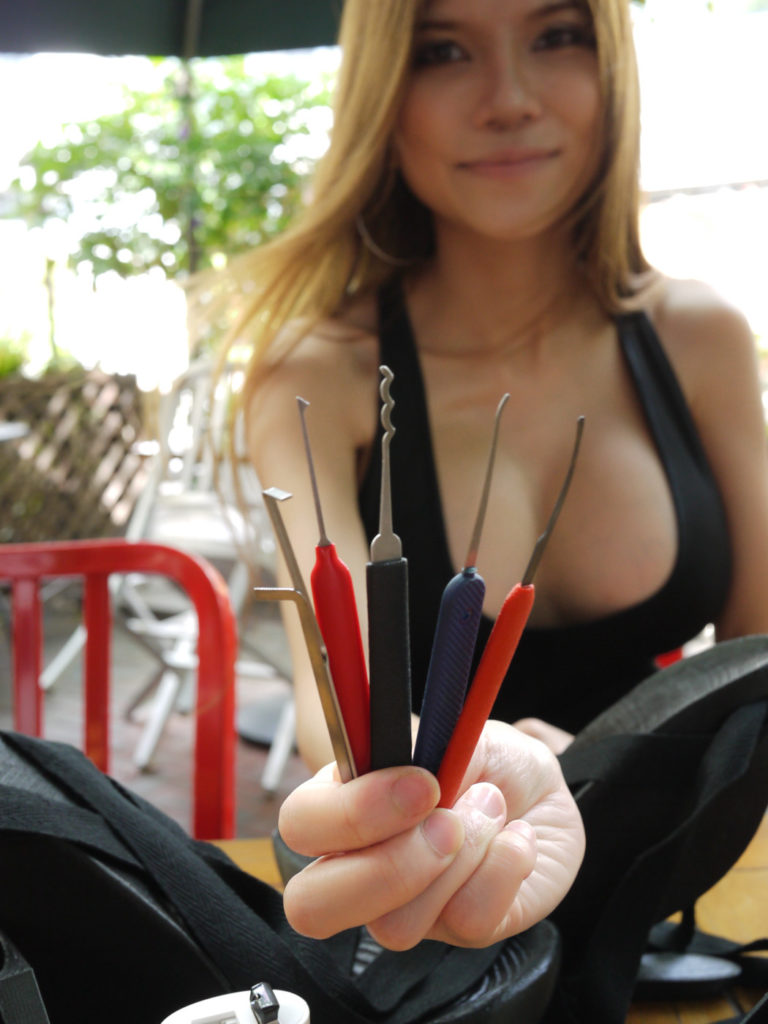 Boris Landoni – In the open-source world, it’s rare to find a woman Maker, do you think this will change in the future? How many ladies and men are there among your fans?

Naomi Wu – There are a lot of issues with women and open-source contribution. Not only are there fewer of us, for whatever reason we usually earn less so are less able to afford to work for free on a project. Then of course without open-source experience on our resume we earn less- and the cycle goes on. Although bounties could help with that I suppose. Established projects also often have very narrow cultures that even when they mean well have trouble incorporating people with dramatically different life experiences (like being female). I hope the situation improves as more women learn to code but can’t really say how that might come about.

As far as my male to female follower ratio, for a long time on Twitter it was 70% men, 25% women and 5% non-binary I think? I always followed more than 50% women and worked very hard to improve that ratio. I have followers and I have social capital, however non-conventional the means I come by them. I really would like to be able to use that to highlight less visible, more deserving women in the community.

Recently I made the decision to stop “spinning my wheels” and do what would pay for more projects and time to make them- monetize my appearance. I never had before- I code under a male pseudonym. So I have Patreon sponsors, and I work a bit more skin into my videos for them. On the one hand I have money for parts and tools now and I can take Sundays off to do nothing but build, but on the other I lost a lot of female followers who understandably don’t want to see constant underboob. I don’t mind the fan service, but I mind that it turned them away and I hope I can find a way to win more of them back in spite of that. 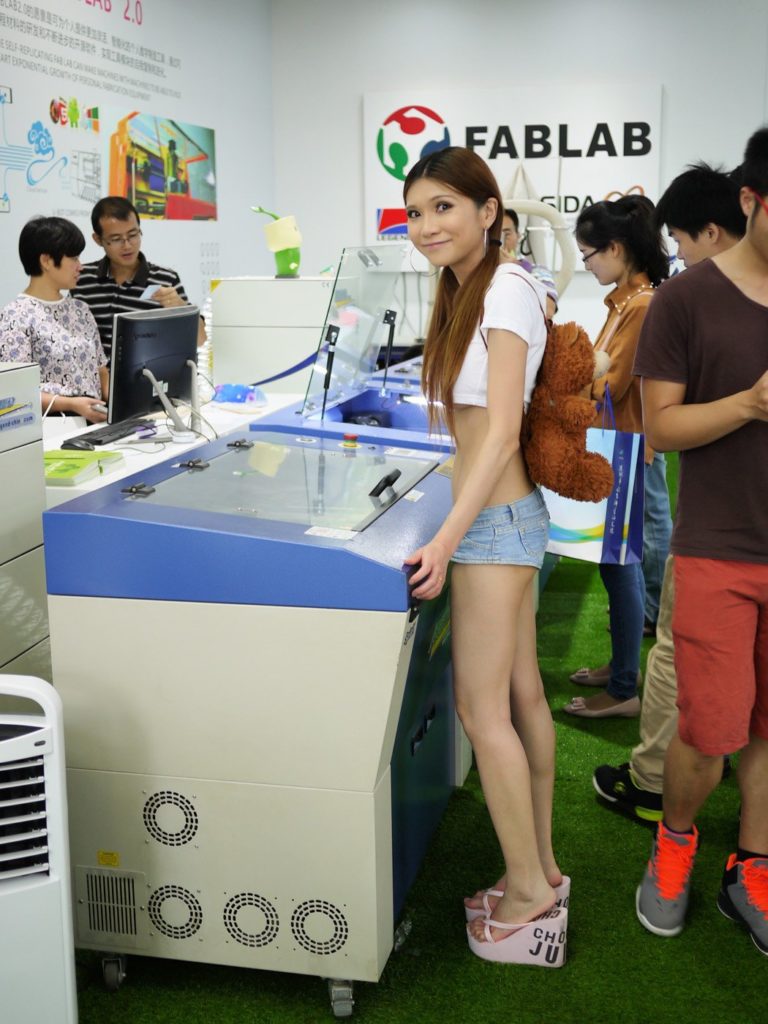 Boris Landoni – How did you become a Maker? Where this passion come from?

Naomi Wu – Face! Haha, Making gave me face. I started when I was 20 and of course like any 20 year old I was (and probably still am) a bit vain and I fancied being famous online. There are so many of us in China, it’s hard to stand out, to feel like your own person. It can be a bit suffocating. So after my first simple project (a mini-skirt with lights underneath) showed up all over the Internet I was hooked. Of course, now I love Making for lots more reasons, and am passionate about hardware and open source- but I’m not embarrassed to admit it was simple vanity that go me started.

Boris Landoni – If you shall name a person whose thinking and practices shall be considered an inspiration, who would she be?

Naomi Wu – Limor Fried of course. She has no equal. 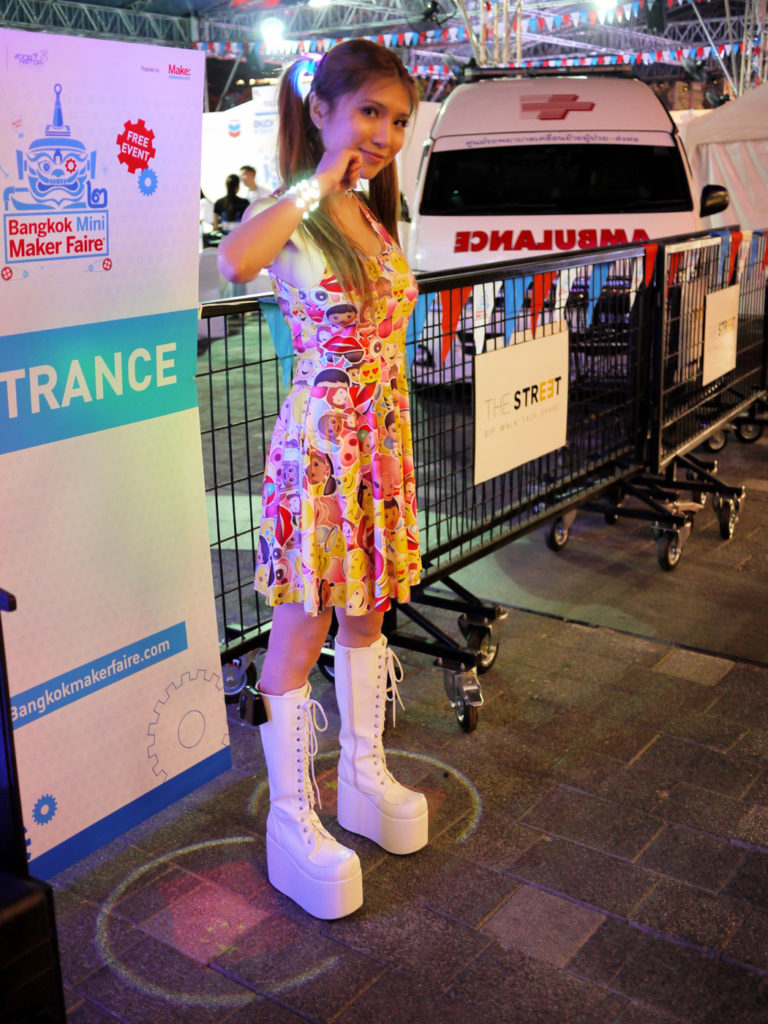 Boris Landoni – Could you name few projects, frameworks or initiatives that are doing a great job of expanding the maker/hacker movement?

Naomi Wu – Linux Mint. Ubuntu is great but Mint is the one for me. They’ve been doing a great job focusing on simplicity and usability, I can get anyone up and running on Mint, it’s completely intuitive and they love it.

The Calliope Mini project, I think their improvements to the micro:bit are significant and unfortunately overlooked because most of the documentation is in German- although I fully agree with their choice that English be taught to children separately from coding and hardware.

OpenBuilds is becoming very useful with just a small handful of standard parts. I use a lot of aluminum extrusion for tables and such already, working machines with the same seems very useful. I wish there was a simplified, easy to use CAD package for it though. 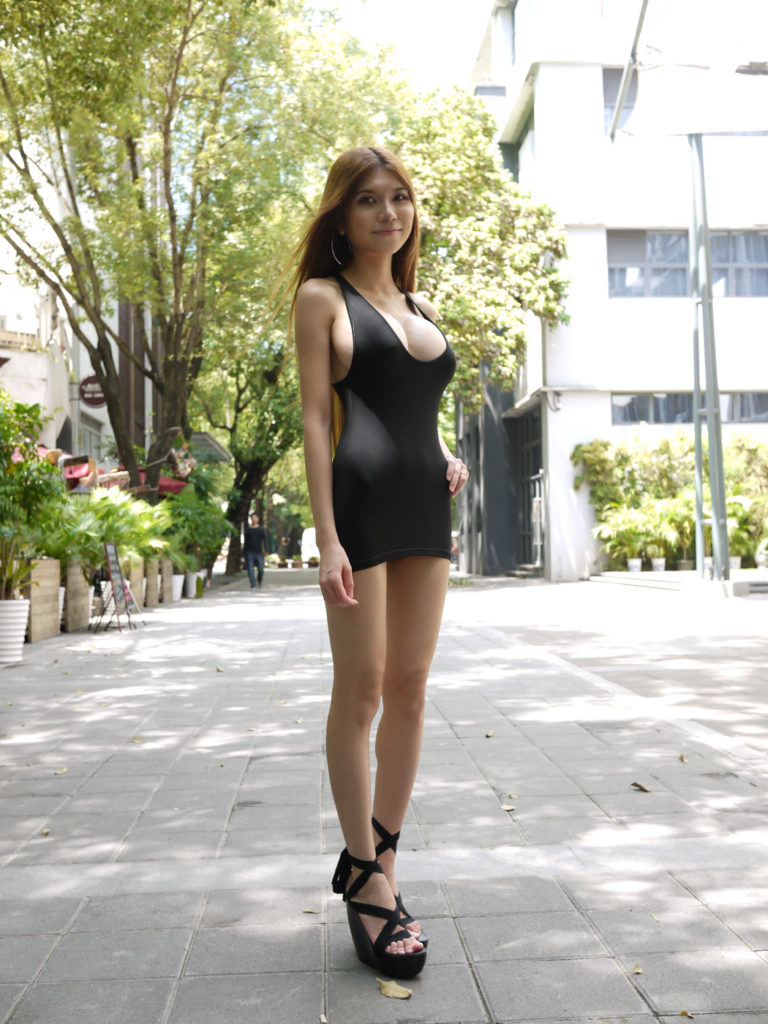 Boris Landoni – What is your most successful project?

Boris Landoni – Our website is about Open-Source. But I often hear developers who are afraid to release the sources or their work. They are afraid their work will be “stolen”. What do you think about that? Do you think that it’s possible earn from the open-source world?

Naomi Wu – At least some of my traffic comes from releasing the source to everything I do- and every picture and video I am in is also CC-BY-SA. So used properly it can be a good marketing tool I suppose. I’m working on my first serious hardware project now, I can’t go into details but of course it will be Open Source. Once I publish the source for it I’ll be better able speak to the economics of OSS/OSH. When Chinese companies question if Open Source can be profitable I usually just point them at Prusa and Lulzbot. 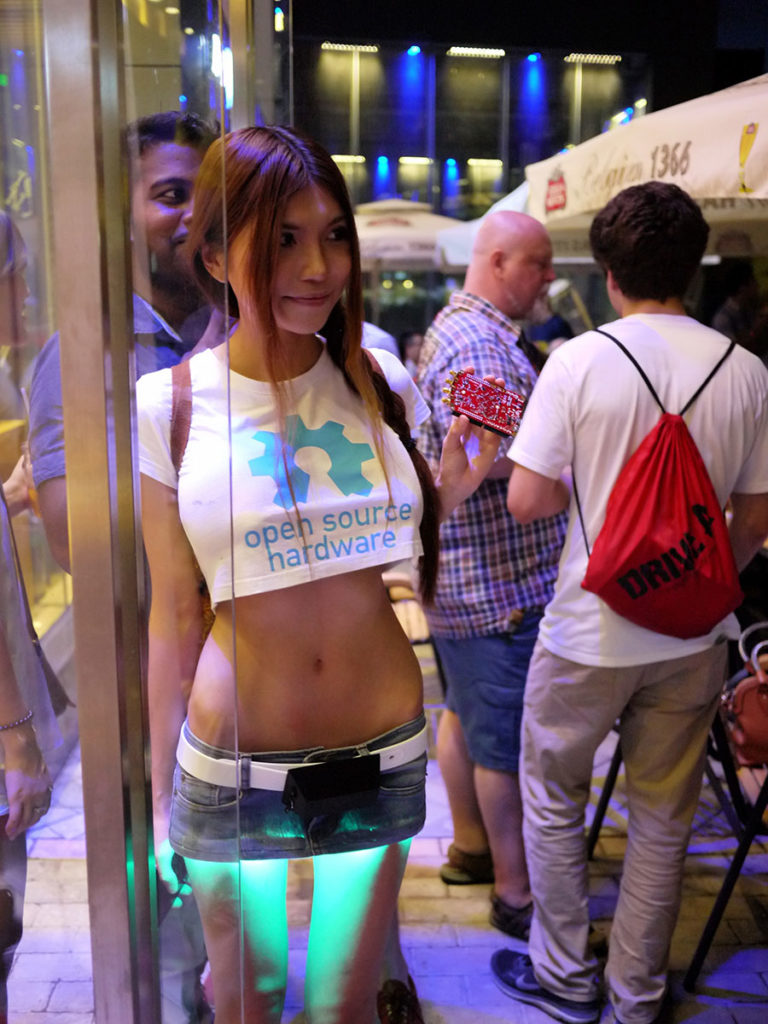 Boris Landoni – Tell us about Patreon and your channel on this site.

Naomi Wu – LOL I don’t even know what to think of it. I refused to accept any money for Making for two years because it felt like being a beggar to me. I really wanted to open a Makerspace for local women and girls and worked to get a high enough profile I could raise money for that., But the funding really required Western validation, and of course those gatekeepers felt I was “problematic”. So I had to accept that even if kids love me and I am very careful to dress appropriately around them, being a MakeEd professional was not going to happen. In startup terms I had to “pivot” and can’t really look back at what could have been.

The problem is my coding work left almost no time to build projects which is all I really want to do. A lot of people I respect are vloggers and honest entertainment is a good and useful service I guess? So I try to view it that way, people pay me to make interesting things, and show them of with a bit of flair. But…yes going from anonymous online coding for an hourly fee to whatever it is I’m doing on Patreon is a little odd.

All that aside, my sponsors- I could not ask for more. They are kind, generous, supportive, never demand anything, even though half the time I have no clue what will make them happy they are nice about it. The biggest problem is you feel lazy and ungrateful for not doing more in return. So that’s kind of given me a kick in the pants to work harder and be more productive. You can’t take these things for granted or take advantage of people’s generosity.

Boris Landoni – In your Patreon profile you say you are “very active in promoting Open Source & Maker culture, and encouraging innovation in Shenzhen”. And you are promoting this culture sharing your projects. Do you have other systems to promote this culture?

Naomi Wu – Sure, I’ve done Chinese language articles on some on accessible websites: http://www.nanjixiong.com/thread-98003-1-1.html but mostly on WeChat. Most of what I do is in our WeChat groups, I’m pretty notorious for going on rampages over attribution issues LOL. You have to keep on it, make sure if they steal they lose face, make sure if they publish you make a big deal and give it. Being a young women in China gives you a certain amount of social capital in these situations, you can shame companies that engage in bad behavior- not a lot, but they are sensitive to ridicule. You tease them, laugh at them, show links to who they stole from. I’m very, very vocal- at least a couple times a week I’m having a fight online over some OSH issue. You can’t give up.

Boris Landoni – Most of your creations are wearable. How do you see the future of wearable electronics?

Naomi Wu – I think there are significant issues still with simple usefulness. Most just duplicate functionality that’s already present in the phones we carry, that’s why I think FashionTech has so much potential. Phones don’t make you look more interesting, now that they are all glass slabs they are dead as fashion accessories. So what is the next technological fashion accessory?

Naomi Wu – Sure, most are on http://sexycyborg.imgur.com but that link is having trouble on mobile. YouTube has videos of my builds: http://www.youtube.com/c/SexyCyborg and Twitter is always a good place to see what I’ve been up to https://twitter.com/RealSexyCyborg

Thank you for your time Naomi