After seeing this wonderful piece of work several times around Italy fairs, first in Codemotion and then also during the Maker Faire in Rome, we decided that we are so much in love with this incredible project that we wanted to present it through the words of its creator, Antonio Ianiero, member of Unterwelt, a small but big (in terms of the creativity that unleashes) Rome hackerspace, founded by Alessandro Ranellucci – father of Slic3r – that we had already the opportunity to interview here on Open Electronics.

When we asked Antonio to tell us something about the project, especially about why and how this was born, he pointed out that the main objective behind the whole thing has always been to produce something, a machine, that was capable to astonish. A noble intention nowadays!

Certainly this vertical plotter reaches its ambitious goal by virtue of the many different specificities. First, the minimalist setup that sets it apart: a pen, an document clip, a semi-invisible fishing wire and a compact system that moves it. Furthermore this minimal set of ingredients allows to create drawings of any size, and is particularly suitable for designs that are huge.

In addition, quite incredibly, the structure of the plotter remains unchanged at the changing scale of the drawing. Last but not least, you can control it remotely with a smartphone: the effect certainly leaves many (including myself, a few times), open-mouthed. 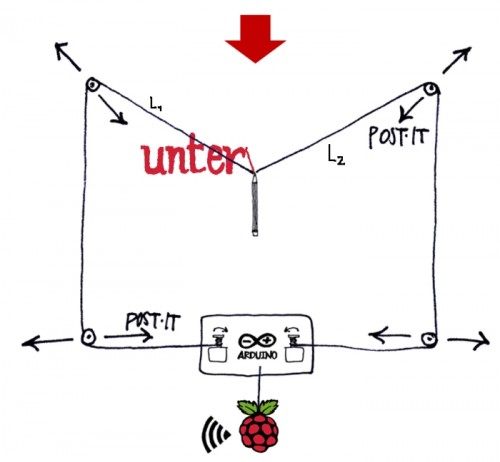 As Antonio tells: “vertical plotters are based on the use of a two points reference system, alternative to the classic Cartesian reference system in two axes. You choose two fixed points in the plane, the poles, and identify any generic point in the plane with the pair of his distances (L1, L2) from the poles.”

Normally in the vertical plotters, the use of a microcontroller as Arduino is expected to control two stepper motors on which a wireis wound, with the other end tied to a common marker.

But Anthony did not particularly like the fact that the engines were installed in the poles, so he thought it best to reinterpret the project in a somewhat different manner. As he explains: “In the classic setup, engines are mounted on the two poles: by wrapping the thread you vary the distance of the marker from the poles and you can reach any point in the plane. A computer connected to the microcontroller handles the sending of the drawing to the plotter as a sequence of successive points to reach. Theoretically, a vertical plotter works on any size, without the need to modify the structure by simply moving away the poles. From a practical point of view, however, when poles become far, you still need an installation of the engine that involves the need of a huge electrical wiring that connects them to the microcontroller, the power supply and the computer that manages the drawing commands. This setup becomes more complex with the increasing size of the design”. 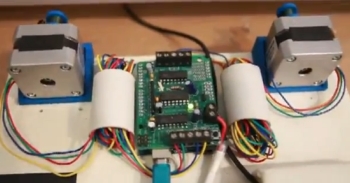 Right here Antonio has the intuition that in reality, putting the engines low in the setup and close together, installing two pulleys in the poles and two at the bottom, it could be “turn” the (fishing) wire around the design instead of the electric wire: “So you can really leave unchanged the structure when the design scale changes: simply move them between the pulleys and use more yarn!”

Antonio’s plotter uses a firmware that can interpret Gcode. In this way the plotter is treated as a generic CNC machine, a bit like a huge 3D printer on a single layer. For this analogy, the plotter currently relies on Slic3r to generate the marker paths from an STL model of what you want to draw “we could even develop new print heads that are more complicated than a market for different functions,” adds Antonio.

Exposing the project at Rome’s Codemotion, Antonio met Andrea Bernicchia, a Raspberry Pi expert, which was very amazed by the plotter, and is now helping Antonio with software development.

Thanks to the work of Andrea it was possible to replace the computer with a Raspberry Pi board configured as a WiFi access point and control everything remotely, with a smartphone. In this way, the system has become completely autonomous, and the installation is very clean: “what’s more, not only a collaboration was born from the meeting but also a friendship,” adds Antonio again.

Currently the team is working on a system that eliminates the inaccuracies due to the accumulation on the coils of wire and to a wireless marker lift: on the software side the guys are working to enable you to generate drawings from generic jpeg images. 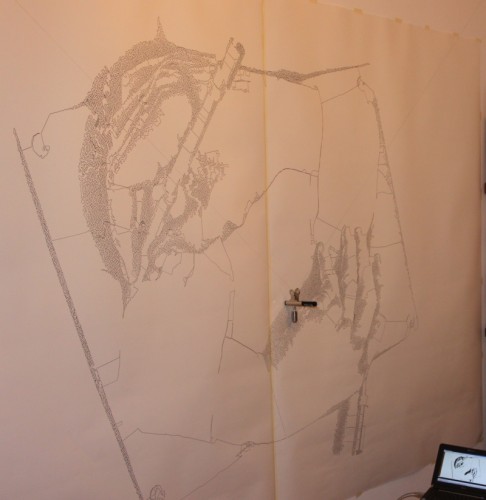 At the moment, the thing on which the team is working more actively is the improvement of the plotter in order to create a marketable services proposal of what it could offer: “I think of installations in the exhibition spaces or in public events, or to plotting services for walls and windows. “says Antonio. In the medium to long term, there is also the possibility of marketing the product, either as a kit as an object already assembled and ready to use.

I would say that a feedback of our community could convince the team that a kit could really work! Let us know if you would like to see the plotter for sale, maybe on our store!

Obviously, to sell the product, it would take some industrialization steps: “One important step will be the redesign of the elements of the plotter to make it easier to assemble and to install on the wall, as well as the simplification of the software workflow for the production of the graphics to be plotted. We also think of adopting laser cutting for the realization of the physical structure and the engine mounts, leaving to 3D printing, only the realization of the coils.” 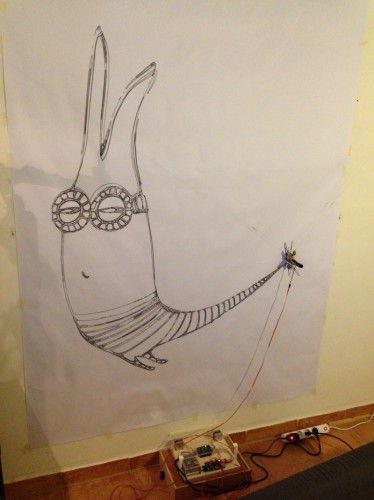 As Antonio confirmed, furthermore: “the idea is to release the entire project under an open source license, once the production of the kit.”. We’ll vigilate :)

In the final analysis, we asked Antonio to tell us what was the role of Unterwelt in this creative process and if you could do it alone, “Being part of Unterwelt was crucial for me. I have had the opportunity to share my design ideas with Alessandro, Matteo, Federico and this accelerated the technical refinements to the plotter and helped bring together inspirations and different sensitivity that complemented mine. If I had developed on its own, the plotter would not be what it is today. In addition to this, it was obviously important to have a physical place where design and build prototypes of the plotter and where can leave it permanently installed. Among other things, this gave Unterwelt a special atmosphere: the wall always has something new to show!”

If anyone still need to understand what is the importance of having a place where you can confront creatively with others, as a makerspace, here it is served!