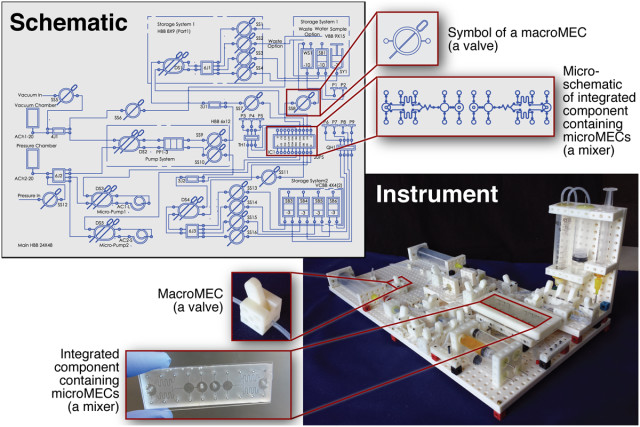 Douglas Hill, a graduate student at the University of California, Riverside (UCR) under Assistant Professor of Bioengineering William Grover, has developed a LEGO-like system of 3D-printed blocks for creating research tools on the fly. Dubbed Multifluidic Evolutionary Components (MECs), Hill’s 3D-printed modules can be used for performing tasks for chemical and biological research, such as pumping fluids or making measurements.

Assembly of an MEC system begins with a set of symbols representing a wide variety of functional, physical modules. Acting as a common language between MEC designers and users, these symbols are used to draw up a schematic of which modules will ultimately form the basis of a given lab instrument or setup. The actual MEC modules, which feature connectors on their bases, are then assembled onto a 3D-printed board, perforated by a variety of connector holes, to match the schematic.

The individual components are made up of a combination of off-the-shelf and custom-made items. While resistors, photocells and syringes might be purchased from a supplier, various valves and fixtures are 3D printed. In the case of the UCR team, a Stratasys Dimension Elite fused deposition modeling 3D printer and a Formlabs Form 1+ stereolithography printer were used to 3D print these parts. For the microfluidic modules, however, the group cast components from silicone. In total, 50 students from across UCR developed more than 200 MEC blocks and associated schematics for research and lab tools.