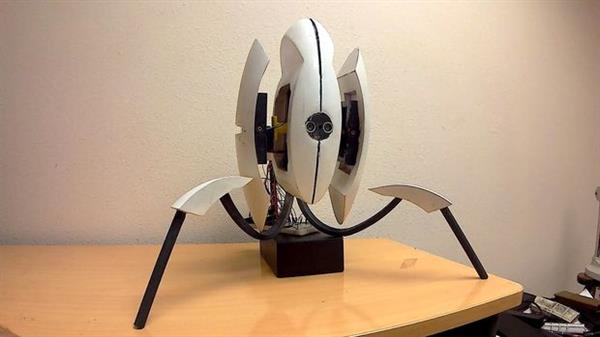 Fans of Valve’s innovative and unique video game series Portal should check out a recent Instructables page published by a user called Stephen Gioiosa. As part of a maker course at the University of Florida, the Portal enthusiast 3D printed a replica of Aperture Science sentry turret, one of the game’s iconic turrets. The results he achieved are pretty impressive for a first time 3D print project, with a high degree of attention to detail including arms and a built-in motion sensor.

The only requirements for the maker assignment he was given by the college were that it had to make use of 3D printing technology and Arduino hardware. Arduino was perfect for the sentry turret project as using the Arduino hardware would enable the turret to incorporate similar functionality to the original in-game version, rather than just being a 3D printed prop. Gioiosa’s three main requirements for the project were that the turret’s arms would be able to pop out, it would be able to speak, and it would be able to make use of a proximity sensor.

Most of the designs were done using the Solidworks software program, which Gioiosa had free access to through his course. Four MG996R Digital Metal Gear Servos were used to get the turret to move as he wanted it to, and he took a speaker from a bluetooth shower radio. The 3D print job was relatively simple but time-consuming, with a number of different parts to be printed and then some extensive post-processing tasks.

He decided that the best way to track motion would be with a HC-SR04 proximity sensor. This ultrasonic motion sensor was capable of detecting how close things are to it, but is limited to 30 degrees of vision and can only detect proximity in a straight line. An array of PIR sensors could potentially be integrated instead, to map movement around the turret in more than one dimension.

Gioiosa’s replica turret is an impressive real-life homage to a game that he is passionate about, and for a first time 3D printing/ Arduino project it’s really a huge success. Click here for further information.