The Story behind Atadiat: bringing Open Source Hardware to Syria 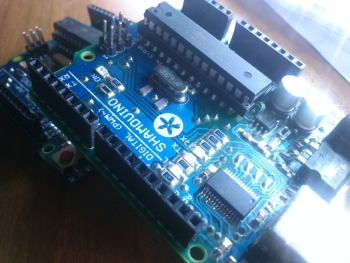 Just few weeks ago, I’ve been informed for the first time about the existence of an Open Source Hardware Startup called Atadiat, operating in Syria. I stumbled upon the news since a friend shared a tweet mentioning the Shamduino board (an Arduino inspired board) and the fact that the board was basically made out of locally sourced materials. I basically reacted enthusiastically since – as you probably know if you’ve read some of the opeds here on the OPen Electronics blog – I’m strongly interested also in the impacts that open source hardware must and could have towards manufacturing and relocalization of productions also in terms of materials and supply chain in general.

I was so curious about the approach that, when I received an email by Yahya Tawil, founder of Atadiat, I was enthusiastic to know more. This conversation opened up my eyes on the complex situation that these guys live in their home country that, as Yahya effectively told me, is in a “war and unstable situation”. To tell this amazing story of people that, despite incredible difficulties, still follow their North Star of advocating for an inclusive hardware community, based on open source and access to knowledge, I decided to write down this interview, asking Yahya to tell us more about their situation, experience and ideas.

We often forget what’s the role of Open Source, is that of making innovation possible without enormous amounts of capital, is that of allowing us to build on top of each other intuitions, is that of giving society new tools to improve itself behind money and competition. At the end of the day, Open Source Hardware is about people and freedom of creation.

Building the community in Syria and the Arab world

First of all, I wanted to ask Yayha what was his experience of building a community around Open Source Hardware Makers and Collaboration in the Arab World.

“Well, everything started two years ago, more or less, when we started to learn and publish open source hardware and the Arduino culture in our community. I was part in the process of founding communities in Syria, and in the whole Arab world, ok likeminded persons interested in Open Hardware, DIY, digital personal fabrication and hacking. One of these communities is fablogia, which is a Syrian sub-community of a bigger one called wikilogia. The second community is called OHDIY (Open Hardware and DIY Group) which, basically, consists of an arabic facebook page with more than one thousands fans and facebook group with almost two thousands members which gathers makers and hackers from the whole arab world. One of OHDIY’s internet event was the translation of upverter guide. I’ve organized lot’s of other activities with great people from the region: a lot of Arduino meetups and related workshops (on CadSoft Eagle or plain electronics for example) and I gave lectures about open hardware and hardware entrepreneurship.”

Personally, I wasn’t expecting such a mature community in the Arab countries, maybe it’s my fault, but it has been a really good surprise (considering that I’m also in charge of helping the OSHWA building international branches).

Despite this, the situation in Syria is not easy at all, as Yayha told me “We faced a lot of difficulties especially because we are in a war and revolutionary situations, and we couldn’t bring Arduinos and other stuff from outside Syria. That’s when we tried to make our local circuits.” – so it was not about responsible manufacturing, but more a response limits to trading imposed by the situation – “within a year, my friend Anas (co-founder at atadiat) eventually created a prototype of a locally designed Arduino compatible board with a usb-serial converter as we don’t have access to machines that could print the very same Arduino PCB, for example we don’t access to machines to create Vias on PCBs“ 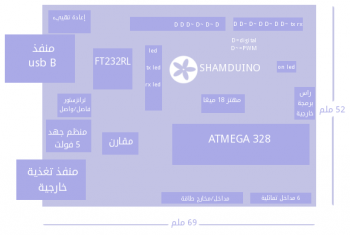 The Shamduino – the Arduino clone the guys created given the constraints – isn’t a lot different from the actual Arduino original board: the PCB is based on  Ft232rl  and not on Atmel’s atmega16U2 since the latter is not avaliable in Syria. Also some marginal parts were replaced with locally available alternatives. Shamduino though, still have all Arduino UNO features (such as smd components, atmega328, same physical size, … etc) .

Once the Shamduino was designed and ready to be commercialized, a new kind of problem came up: ”well, we wanted to put this products in local stores but we found out that these stores are based on provider monopolism and on high revenue rates” – eventually then, the web will be the real alternative for Atadiat to distribute their unique products to a wider ecosystem of customers, one of them could be you: “we are looking forward to have distributors in other countries (ed: interested?) but this dream need hard work to be real! For now, we depend on our website and our social accounts as channels to reach out to our customers, and we are already able to ship to other countries”

After all these lesson learnt and all the effort put in building a company and a community, Yahya has very clear ideas about what’s needed for the Syrian Open hardware community to thrive: ”from this point I think that my country still has a massive need of localized versions of stores and companies such as open-electronics, sparkfun, etc… with a sustainable structure.” – and he has a pretty clear idea of what kind of company he would like to work to create “a company that is interested in producing circuits form local resources, with local manufacturing and designs, that could also make services like designing or printing PCBs. Our bigger dream is create peer to peer community services, such as the ones offered by tindie, and to eventually create a collaborative community, made of people”.

Despite all this effort, Yahya complaints about the impossibility to go for a 100% open source hardware: “When we announced Atadiat we didn’t mention we were to be an Open Hardware company, although I consider myself as an Open Hardware advocate. Unfortunately we aren’t 100% in line with the requirements of the open hardware definition, but our Goal is to be Open Hardware in all aspects, at the soonest”.  But what’s preventing them to be 100% open?

“The problem is that we don’t have the tools to face the cloners: they have money and resources we don’t have. We don’t even have tools. Consider we do all of our  products by hand and imagine how a, well done, SMD soldering takes efforts and time for us. Also PCBs: we don’t have circuit milling machines and we can print our circuits at one facility that doesn’t even have the ability to do VIAs in PCBs! Remember that they’re almost monopolists and they don’t want us to damage their high rates of revenues. Before us, they were the only way to get electronics for local needs, and they don’t like the kind of innovation we would like to bring”

Just to give you an hint about the situation these guys face, the buy Ft232rl chips for about 5$ and atmega328 for 7$! That’s not a market price at all and it makes it difficult for them to compete also if they go for internet distribution. Cloners and monopolists can instead take these electronics parts at real cost

Despite the difficulties the guys are partially embracing open hardware principles, Yahya resumes it as follows:

1) Our slogan is: designing manufacturing sharing.

4) All of our products are well documented.

“Behind all this, we trying to solve these problems, our strategic goal is to bring real open hardware to market in Syria and to support hardware startuppers here”.

Questioned about the health of the community in Syria, Yayha tends to be honest: “there aren’t a lot of hardware startuppers in Syria interested in Open hardware, maybe the conditions in Syria don’t allow much of startup thinking in general. Anyway I think Syria and arab countries need a lot of efforts to encourage open hardware and open hardware startups. First , open hardware culture still new and people need more time to get informed and convinced. Also our communities have a lot of problems in terms of monopolies and economic complexities: people need to see locally arabic successful open hardware system in action. Lastly, Arab countries, except Egypt I think, don’t have laws to protect works under open source licences (ed: that’s a very common problem, not only in Arab countries).”

The Future of Atadiat 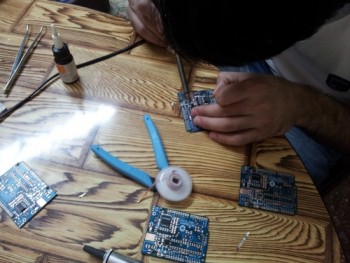 With this so important background experience, Yahya still looks forward to learn more from what he calls the DUINO culture and also follows the inspiring works of other open hardware projects such as reprap or OSE.

Furthermore, he would enjoy some real help from the worldwide community: “We are thinking to fund our project using one of the amazing crowdfunding platforms around. Since most of our problems are related to the Syrian landscape, with this war situation and other logistic problem such as difficulties in Importing electronic parts or machines, we are looking forward do part of our work in another county to facilitate and enlarge our abilities.”

The strategy for the next months behind the crowdfunding campaign that we all look forward to support, and this idea of expanding Atadiat partially out of Syria, is that of growing the product portfolio both in quantity and differentiation keeping it mostly manufactured and redesigned locally.

It was beautiful and inspiring to see the work of this Open Source Hardware visionaries, fighting to build a genuine open source hardware company in such a complex overall situation.