SparqEE is a Cellular development board that gives you Wireless Worldwide. It provides boards for both, Arduino and Raspberry!

The CELLv1.0 uses a 2G+3G chipset, which means it will use 3G primarily worldwide and only fall back to 2G if 3G is unavailable.

Question: Why are 2G (GSM/GPRS) devices less expensive?  Answer: some 2G only systems are less, BUT, here’s the backstory: We chose to provide both 2G and 3G because AT&T is dropping their 2G service in 2017 (TMobile coverage is much more limited than AT&T and the CDMA technology Verizon and Sprint use isn’t prevalent elsewhere in the world).  With the CELLv1.0 you get the best of both worlds – 2G, which is the most prevalent worldwide technology, while still providing full cellular coverage in the US using 3G. So if you want a device that works across the world for decades to come, go with the CELLv1.0!

The CELLv1.0 is the smallest module on the market, the least expensive 2/3G device out there, and the easiest to use! 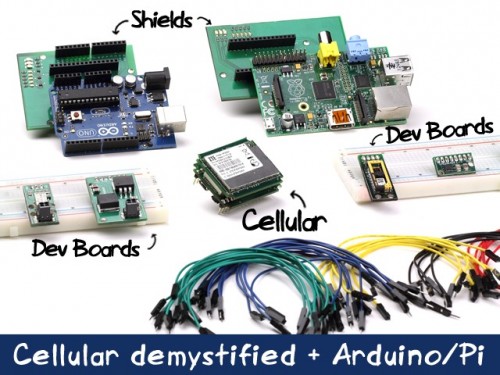