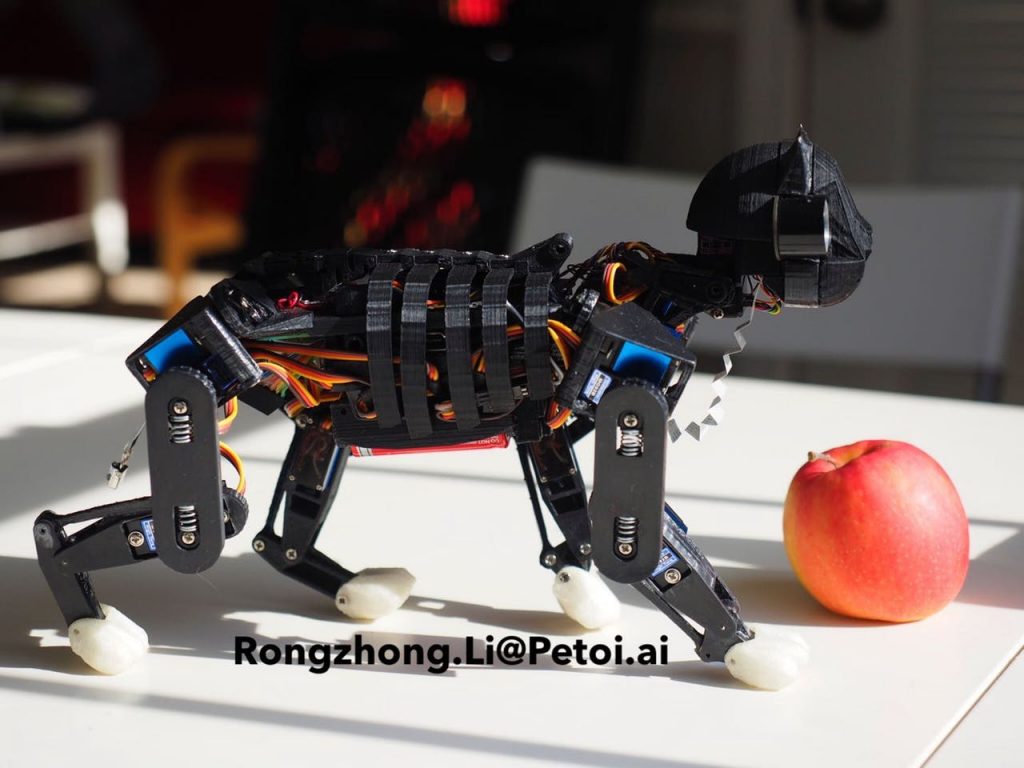 OpenCat is a project to build a robot cat and is an interesting project that demonstrates how much you can do with not a great deal.
This project has been created to provide a robot suitable for STEM education and programming, which is equipped with artificial intelligence and capable of a wide variety of different manoeuvres.

As you can see from the image above the OpenCat framework has been constructed using 3D printed components which have been combined with servos, AI and programming to create the awesome project.
The current cat is the result of one and a half years work on seven different models. The most interesting thing about the hardware is that it makes use of an Arduino for motion control and a Raspberry Pi for higher level functioning.

“The motion algorithm is currently implemented on a 32KB,16MHz Arduino board, using up its system resources with algorithmic optimization almost everywhere. I’m going to switch to a 256KB,48MHz board to boost the performance of active adaption, as well as allowing additional codes by future users. The motion is actuated by hobby level (but still robust, digital & metal gear) servos considering price. Some elastic structures were introduced to damper the shock and protect the hardware.

On top of the motion module is a RasPi. The Pi takes no responsibility for controlling detailed limb movements. It focuses on more serious questions, such as “Who am I? Where do I come From? Where am I going?” It generates mind and sends string commands to the Arduino slave. Motion instructions can still be sent to the Arduino in a slower manner. A human remote sits in the middle to intercept the robot’s control of its own body. It will still hold certain instincts, like refusing to jump down a cliff.”

And in conclusion the bad news: the inventor, Rongzhong Li, seemed to want to make it open source originally, but now has ideas about producing a commercial kit.

“I’m now teaching a university robotics class using the Mini kit. I hope to sell more kits to validate the market and bring in some revenue to keep the project going. The full version is yet to be polished. I’m also applying for several accelerators and will probably try Indiegogo. Depending on where the best support I could get, I may start a business or make the project completely open-souce.”